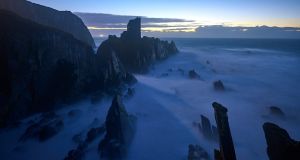 The sky and emerging stars viewed near the historic O’Driscoll castle on Cape Clear during a clear evening. Photograph: Peter Cox

Cape Clear Island off west Cork is staging its first “Dark Skies” gathering for star gazers, who will benefit from a lack of polluting light from towns and cities that is all too evident in most parts of the country.

The island is seeking to join only 22 Dark Sky sites recognised worldwide by the International Dark Sky Association, and to further live up to its name.

The sites are dedicated to stargazing, but such sites are increasingly hard to find. The amount of light created by modern living makes it harder to see and appreciate the true beauty and wonder of the night sky, according to local national school teacher Shane O’Neill.

Lying eight miles off the coast, Cape Clear is unique “as it is remote from towns, cities and busy roads and is an area of outstanding natural beauty”, he explained.

Already famous for ornithology and whales, dolphins and basking sharks, its pristine night sky is another natural resource the island has to offer, he said. It was ideal to combine birdwatching during the day and star gazing at night. “They go hand in hand,” he added.

The event this weekend, which is limited to 100 participants, was inspired by what he saw living on the island’s south side. He quickly became impressed with the clarity of the night sky, often seeing shooting stars, planets, red and blue moons and even the International Space station moving across the sky.

“Keeping up with celestial events quickly became a passion and one which I would like to share with others,” Mr O’Neill added.

Dark Skies events provide opportunities to view the night sky with the naked eye, accompanied by experienced guides and astronomers “sharing their knowledge and appreciation of the splendour above our heads and breathing new life into the rich folklore, tradition and history associated with the night sky”.

The first Cape Clear Island Dark Skies event includes both night and day time events and is being staged with support from Blackrock Castle Observatory and Cork Institute of Technology. And if there is any risk that artificial light might contaminate night views, the organisers have permission to switch off the island’s 30 street lights, he confirmed.