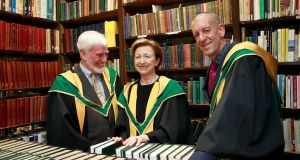 The Royal Irish Academy (RIA) is to establish a new academy for Ireland’s leading young researchers in the sciences and humanities.

It will provide “a forum for Ireland’s early to mid-career researchers and scholars so that their voices are heard within the RIA and by national and international policy makers”. They will join an international network of 45 national young academies.

Members of the young academy will be selected for their academic excellence and commitment to public service, according to the astrophysicist Jocelyn Bell Burnell, who chaired a committee which has completed a new strategic plan for the RIA. “The initiative will create a more diverse academy and a new advocate for Irish research and scholarship,” she added.

Among those elected were: UCD historian Diarmaid Ferriter, a regular contributor to The Irish Times; journalist and RTÉ broadcaster Olivia O’Leary; leading neuroscientist and Nobel Laureate John O’Keefe of University College London, Prof Alan Barrett, director of the Economic and Social Research Institute who has contributed significantly to Irish economic policy, and Dáithí Ó Ceallaigh who has played major diplomatic roles on British-Irish and North-South relations.

Welcoming “these eminent scholars” to the academy, Prof Kennedy said they “have made exceptional contributions in their fields of endeavour. We are delighted to recognise their achievements”.

Other members elected were: