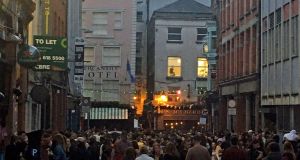 Dublin pubs that serve drink to crowds on the city streets will have their outdoor furniture confiscated, Dublin City Council chief executive Owen Keegan has warned.

Large crowds gathered in the city centre last weekend in contravention of coronavirus public health measures, following the reopening of some pubs.

On Monday Taoiseach Micheál Martin warned the Government might delay the full reopening of pubs on July 20th following scenes of street drinking in the city.

Independent councillor Mannix Flynn asked for tables, chairs and barrels to be removed to deter people from gathering outside pubs where they were causing a public health issue.

“We were certainly aware that there were problems on the streets,” Mr Keegan said.

“We will have people out late at night so if there is evidence of street furniture contributing to unacceptable alcohol consumption on the street we will remove that street furniture,” he said.

Large crowds were seen drinking outside pubs on Dame Lane and Dame Court on Saturday night.

Dame Court is one of a number of streets the council plans to pedestrianise at weekends on a trial basis. Other streets include parts of South Anne Street, Duke Street, South William Street and Drury Street. Vehicles will be banned between 11am and 7pm for four weekends from July 25th.

Large numbers of businesses, particularly pubs and restaurants, have applied to use the pedestrianised streets for tables and chairs.

Under the Covid-19 “mobility intervention programme” businesses can apply to the council for permits to use outdoor space for customers, to enable them to reopen as coronavirus-related restrictions ease.

Meanwhile, councillors have scrapped plans to rezone almost nine acres of land in Chapelizod for housing after legal proceedings were taken against the council.

Last March councillors approved the rezoning of 16 underused and vacant industrial sites across the city for up to 1,600 homes.

However in May plant machinery firm Pat O’Donnell and Company took a High Court challenge in relation to one of the sites, part of which is occupied by the company’s premises at California Heights, Chapelizod.

The company had previously been based in Fairview but moved after the owners of homes built around it over the years raised issues about noise.

It said it was concerned the same thing may happen if homes are built around its property in Chapelizod. It argued it had not had an opportunity to be heard “fully and fairly” on a decision which affected its property and commercial rights.

The 8.8 acre site off the Chapelizod bypass could have accommodated more than 200 homes. However, councillors agreed to scrap the rezoning on the advice of Mr Keegan.

He said the council had obtained legal advice that suggested the company’s court action was “more likely than not” to succeed.

The council had initially selected 20 plots totalling 55 hectares which could have delivered up to 3,500 homes.. One of the larger plots was an 11-hectare site on East Wall Road, close to the port tunnel and the docklands, which could have accommodated hundreds of apartments.

Rezoning this site was shelved following warnings from Transport Infrastructure Ireland and the Office of the Planning Regulator that new homes could scupper the development of the Eastern Bypass under Sandymount Strand. Councillors in March voted against zoning three other sites citing concerns over the type of homes that would be put on the land, the potential height of apartment blocks and the lack of control the councillors would have over the lands.