Dr Tony Holohan to be awarded Freedom of Dublin

Chief medical officer recognised for ‘enormous contribution’ to the State 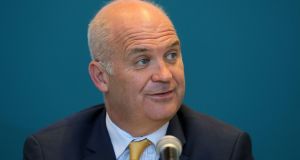 The Lord Mayor of Dublin Hazel Chu proposed Dr Tony Holohan for the honour in recognition of his work in leading the public health response to the coronavirus pandemic and as a representative of all front line workers. Photograph: Brian Lawless/PA Wire

Chief Medical Officer Tony Holohan is to be awarded the Freedom of the City of Dublin.

Newly elected Lord Mayor Hazel Chu proposed Dr Holohan for the honour in recognition of his work in leading the public health response to the coronavirus pandemic and as a representative of all front line workers.

Dr Holohan had made an “enormous contribution to the city of Dublin and this State” Ms Chu said. “Through this award we’d like to honour all front line workers,” she said.

The proposal was unanimously agreed by Dublin city councillors on Monday evening.

Dr Holohan last week announced he was stepping back from his post to spend time with his wife, who has terminal cancer, and their children.

All-Ireland senior football team manager Jim Gavin was the last recipient of the award. He was honoured last year following the Dublin team’s historic five-in-a-row win in the All-Ireland final against Kerry.

The award was surrounded by controversy three years ago after the council decided to strip Myanmar de facto leader Aung San Suu Kyi of her Freedom of the City of Dublin award,

Councillors voted in 2017 to rescind the 2000 decision to bestow the Freedom of the City on Ms Suu Kyi and instructed council chief executive Owen Keegan to remove her name from the “Roll of Honorary Freedom” because of the repression of her country’s Rohingya Muslims.

The council also agreed to a request from Bob Geldof to remove his name from the roll.

The Dublin-born singer, activist and businessman handed the scroll recording his freedom of the city back to city council officials the previous month in protest at the honour being held by Ms Suu Kyi.