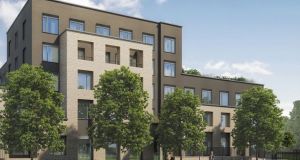 A mock-up of Bartra’s proposed co-living development on the Old Navan Road, Dublin.

Permission for developer Richard Barrett’s Bartra Capital to build a 200-bedroom co-living apartment block in Castleknock, Dublin 15, has been quashed by the High Court.

An Bord Pleanála last January granted permission for the build-to-rent shared living development on the site of Brady’s pub on the Old Navan Road.

However, local residents, under the banner of the Talbot and Old Navan Road Residents Brady’s Task Force, took judicial review proceedings against the board’s decision.

The board had granted the permission against the recommendations of its own inspector. In issuing its decision in January, the board said it had done so as the location was in keeping with sustainable urban housing standards. It said it was satisfied the development met requirements for shared accommodation in terms of common living and kitchen facilities.

Unlike recent judicial review decisions where the court has quashed permissions granted by the board, the decision has not been “remitted” back to the board for a fresh decision, and instead Bartra will have to make a new application to the board if it wants to pursue the development.

“This [An Bord Pleanála] decision defied logic and disregarded the input of professional planners, local residents, councillors and the board’s inspector. The residents deserve great credit for taking a stand against one of the worst planning decisions made by the board in Dublin 15,” he said.

Co-living was “completely wrong in a settled suburban area” and was never a solution to the housing crisis, Mr Walsh added.

“Circumstances have also changed dramatically since the original application last year and such cramped . . . living conditions are dangerous during a pandemic.”

Bartra chief executive Mike Flannery said that while the company was disappointed with the outcome, the decision to quash permission related to the planning process, “and is wholly unrelated to the proposed co-living use on the site”, he said.

“We remain committed to developing environmentally sustainable and biosecure co-living schemes. We hold the view that one of the keys to unlocking our national housing challenge is to match different accommodation types to the demands of a growing population with very changed living and employment patterns.”

The safety of residents in co-living schemes was a priority and occupants “will rarely have to touch a surface to navigate through the building”, he said.

“Unique to co-living, our residents can also be fully self-sufficient within their private suites. Each individual private suite is entirely self-contained, with a private showerroom, WC and wash area, private in-room cooking facilities, high-speed wifi and a fully functional workstation to enable working from home.”

In response to the coronavirus pandemic, Bartra had developed an “industry-defining standard of cleanliness and disinfection” which will “create a focus on biosafety and hygiene that will be visible to our residents throughout their entire stay”, he said.

Coombe should not have given Covid vaccines to family of staff, Donohoe says 11:54
Vaccine should not be given to people close to death, says HSE 11:27
Brexit: Currys/PC World Irish customers asked to pay import taxes in error 10:29
Defence forces deployed to three nursing homes to ease staff pressure 10:08
Number of Covid-19 patients in hospitals exceeds 2,000 09:50