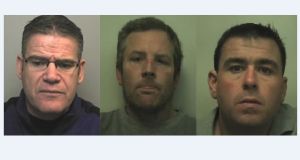 Three senior members of the Kinahan gang, including its leader in the United Kingdom, are facing up to life in prison after pleading guilty to conspiracy to import drugs.

Thomas “Bomber” Kavanagh (52), Gary Vickery (37) and Daniel Canning (41) pleaded guilty at Ipswich Crown Court on Monday, the result of a four-year joint investigation by the Garda and the UK’s National Crime Agency (NCA) into a multimillion euro, Kinahan-backed drug-trafficking operation.

All three are Irish. Kavanagh and Vickery live in Tamworth in Staffordshire while Canning lives in Walkinstown in Dublin.

Kavanagh is considered the most senior representative of the Kinahan organised crime group in the UK. He co-ordinated its activities from a secure mansion, complete with bullet-proof glass, near Birmingham. He is the brother in law of Liam Byrne, who runs the Kinahan’s Irish operations and David Byrne who was shot dead in the 2016 Regency Hotel shooting.

Kavanagh is already serving a three-year sentence imposed last year for possessing a stun gun disguised as a torch. The weapon was uncovered during a police raid as part of the same operation which led to Monday’s guilty pleas.

The three men admitted conspiring to import class A and B drugs, and money laundering. Canning also admitted possessing a firearm and ammunition.

Conspiracy to import class A drugs carries a maximum sentence of life in prison and a recommended sentence of between 3½ and 16 years, according to UK sentencing guidelines.

Canning also pleaded guilty to possessing a firearm and ammunition.

The men are due to be sentenced following a sentencing hearing on October 26th.

“Today’s guilty pleas are the culmination of a four-year investigation into Thomas Kavanagh and his co-conspirators, who were part of a significant international crime network, capable of organising multimillion pound shipments of drugs,” NCA deputy director of investigations Matt Horne said.

“We have worked throughout with our colleagues at An Garda Síochána, and I hope these convictions send out a strong message to others who may think themselves to be untouchable.

“We will be relentless in our pursuit of those involved in organised criminality.”

Kavanagh operated a luxury car sales business in the UK which police believe was a front for laundering money.

He has convictions in Dublin for burglary, drunkenness, two for actual bodily harm, two for making threats to kill and one for possession of a firearm, for which he served a lengthy sentence.

He was one of a group of people who assaulted a witness in the Four Courts in Dublin in 2000 after they gave evidence against Liam Byrne during a criminal trial. At that time he also threatened to kill a detective who was investigating drug dealing gangs in Crumlin and Drimnagh.

In July 1999, the Criminal Assets Bureau (Cab) secured an order against Kavanagh for £106,000 for unpaid taxes on income the bureau said was derived from criminal activity. His house on Knocknarea Avenue, Drimnagh, was eventually seized from him; Kavanagh was among the first Cab targets when it began operating back in 1996.

He said it was “vital that the full resources of the State” continue to target the gang, adding: “The net is closing in on this vicious criminal enterprise.”