Publicans have no interest in Level 3 festive reopening – VFI chief

Pub lobby: ‘Level 3 curbs do not allow us to cover costs and is not practical for Christmas’ 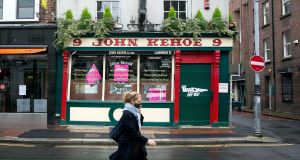 Publicans have warned Government they have no interest in opening their bars for Christmas if the State moves from Level 5 to to Level 3 restrictions in December.

Level 3 restricts restaurants, cafes, and bars to takeaways and deliveries and outdoor service to a maximum of 15 people only.

During the last Level 3 lockdown in Dublin, “wet pubs” which do not serve food were ordered to remain completely closed.

Taoiseach Micheál Martin told the Dáil on October 20th the target was to move to Level 3 restrictions across the State in early December from the current Level 5 restrictions. On Friday, Mr Martin repeated that Level 3 was still the target.

However, publicans have warned that Level 3 restrictions would not allow them to cover their costs and would not be practical for Christmas or into the new year period – particularly given the Irish weather.

Inside Politics · A vaccine on the horizon: how optimistic should we be?
Coronavirus Data Dashboard

Vintners Federation of Ireland (VFI) chief executive Padraig Cribben also warned that Level 3 restrictions over Christmas would result in large numbers of people crossing the Border into Northern Ireland to socialise in conditions where rates of Covid-19 were “four times higher”. He said moving to Level 3 limits would therefore be counter-productive, as those who travelled across the Border to socialise would be bringing the virus back here.

‘It is not viable’

Asked on the RTÉ’s News at One Programme about reopening at Level 3, Mr Cribben said: “Nobody has any interest at any time of the year, it is not viable, it is not practical.” Regarding the prevailing weather at this time of year, he said: “If you look at a day like today, it is just not on.”

He warned: “This is not just about Christmas. I don’t think that any publican is interested in opening for two weeks at Christmas and closing down again. We need to get to a situation where those 7,500 businesses – and equally importantly their 50,000 employees, many of whom have had no work since last March – are looked after. It is not just about Christmas there has to be a plan into January, February and March.”

Responding to Mr Cribben, Minister for Housing Darragh O’Brien said nothing has yet been decided on the level of reopening. He said talk of people going to Northern Ireland to avoid a State-wide Level 3 was based “on an assumption that this is going to happen. I would not assume that.”

He said the Taoiseach was prepared to look at “versions” within the target restrictions and he said the Government acknowledged the difficulties of the sector.

“We will be communicating a plan at the end of this month,” he said.

“The next three weeks, we need people to keep working with us, and hopefully we can open up in a meaningful way that looks at all sectors including pubs as well. This has not been decided on,” he said.

Mr O’Brien asked for people “not to lose hope” on pubs opening. He said: “Christmas is an important time; we want people to have a meaningful Christmas with their families, and businesses to open again.”