PSNI investigating remarks made to Jewish author in Derry

Complaint made in relation to footage seen on social media site 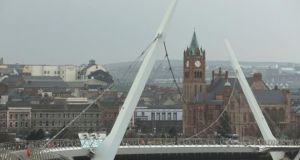 An image of Derry featuring the Peace Bridge in front of the Guildhall. Photograph: Brian Lawless/PA Wire

The police in Northern Ireland have launched an investigation into a video posted online which appears to show patrons in a Derry pub making derogatory remarks about Jews.

Chief Inspector Gerard McLaughlin said the Police Service of Northern Ireland (PSNI) had received a complaint in relation to footage seen on a social media site. “Enquiries are ongoing into this incident,” he said.

In the footage, Jewish author and theatre director Tuvia Tenenbom is seen visiting a pub in Derry and asking patrons why there are so many pro-Palestinian flags flying in the city.

“Because we support them,” one man responds.

In the North, some nationalists and republicans claim common ground with Palestinians while some unionists are supportive of Israel.

In the footage, men in the pub go on to make critical comments about Jews and Israelis, and reference Adolf Hitler’s treatment of Jews.

In reference to the pub patrons who made the comments, Alliance leader Naomi Long said there was no place for anti-Semitism in society, and said she hoped action would be taken.

DUP leader Arlene Foster branded the remarks “disgusting”, adding: “The small Jewish community in Northern Ireland will always have my support and that of all right-thinking people.”

Her party college, North Belfast DUP MLA William Humphrey said the video was “appalling and the views expressed are sick, depressing and vile”. He said he did not believe they were reflective or representative of Northern Ireland society.

“I work closely with our small, but hugely influential Jewish community. Indeed, I have been in touch with some of my Jewish friends, to reassure them that they are a hugely valued and respected part of our community and that they continue to have my personal support and that of my party.”

The writer and former Republican prisoner Danny Morrison also described the comments as “disgraceful”, with a Sinn Féin spokesperson saying: “There is no place for racism, sectarianism, anti-Semitism or discrimination of any kind in our society.”

UUP MLA for Upper Bann, Doug Beattie, said the clip “must be condemned by all right-minded people and all political representatives and parties”.

However, Mr Beattie stressed he did not think the remarks represented “mainstream thinking” in Derry or elsewhere in Northern Ireland.

SDLP leader Colum Eastwood said: “These comments are totally unacceptable; both the language and sentiment is not reflective of the people of Derry. I know the views expressed in the video will be widely and rightly rejected by the people of Derry.”

The full video was made as part of a series called Tuvia With the British, published by Swiss digital magazine Republik.