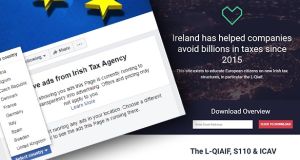 The page, called Irish Tax Agency, is displaying ads to users in ten European countries with the tagline “reduce your taxes on global revenue to 1 per cent”.

Web Summit founder Paddy Cosgrave has claimed responsibility for a Facebook page which has been anonymously running ads about Ireland’s corporate tax system.

The page, called Irish Tax Agency, posted a video this afternoon claiming to have run ads that have been seen by more than 1 million people in other EU countries.

The ads were displayed to users with the tagline “reduce your taxes on global revenue to 1 per cent”. Users are told that “companies have saved billions in tax by relocating to Ireland from high tax EU nations”.

The Irish Tax Agency page on Facebook links to a third party website of the same name, which contains information about tax reducing structures available under Irish law. The website also links to descriptions of the structures on Wikipedia.

The website, whose ownership is not disclosed on domain name registries, encourages users to ring a number “to speak to an Irish Government Press Officer”. The number provided is for the press office of the Department of Foreign Affairs and Trade. According to a note on the website, it was “created by Paddy Cosgrave for educational purposes to help inform European citizens on new tax structures in Ireland”.

In a post on Facebook, Mr Cosgrave said that the aim of the campaign is “to educate a similar group of Europeans, who may have an interest in tax, as to the existence of these seldom talked about structures in Ireland”. He wrote that he is modelling the campaign on a similar one he ran in 2016.

According to Facebook, the page is displaying ads to users in Austria, Belgium, the Czech Republic, Denmark, France, Germany, Italy, Spain, Sweden and the United Kingdom.

Prior to Mr Cosgrave revealing his involvement in the campaign, transparency campaigners had said they were concerned by the anonymous nature of the Facebook page.

Liz Carolan, who founded the Transparent Referendum Initiative at the time of the vote on the eighth amendment, said that pushing to change public opinion on issues like taxation is a legitimate political activity, but “it should take place in the open and be subject to scrutiny”.

“A person being shown a paid advertisement intending to change their mind should know who has paid for them to see it. At a societal level, we need to evaluate campaigns like this, and to do that we need to know the location, identity and funding source of the people behind such a campaign.”

The Facebook page was created last week. It comes after IDA Ireland confirmed that it had paid a digital agency to help it change the entries for the agency and its chief executive, Martin Shanahan. The pages had been edited to include information on Brexit and Irish tax practices by a “person or persons who does not have an interest in presenting Ireland in a positive light,” IDA Ireland’s global communications director Kevin Sammon said at the weekend.

“They have gone to extraordinary lengths to create and link Ireland and its stakeholders to negative stories, particularly on economics, taxation and Brexit.”

The Wikipedia user which was responsible for large chunks of the edits to the IDA pages is an anonymous account called Britishfinance. According to its page on Wikipedia, it has made over 40,000 edits since last March, with a focus on Irish corporate tax, and the Irish economy, as well as other matters.

Britishfinance has also made significant numbers of edits to the Wikipedia articles on Irish corporate tax structures linked to by the Irish Tax Agency webpage. The structures include the Section 110 company, which was used by overseas “vulture funds” to reduce their Irish tax bills to just € 250 a year. The site also links to a UN report on housing which criticised the presence of “preferential tax laws” by the funds.

It also contains information about a structure called an L-QIAIF, which has been criticised by Fianna Fáil for allegedly providing many of the same features as the Section 110, with fewer disclosure obligations.