Protestants in the Republic: Inclusion and exclusion, resilience and pride

Brian Dobson, Heather Humphreys, Jan O’Sullivan and others on growing up in a Catholic dominated State 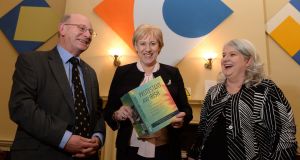 Minister Heather Humphreys TD at the launch of the book Protestant and Irish pictured with its editors Ian d’Alton and Ida Milne, at the RIA in Dawson Street, Dublin. Photograph: Dara Mac Dónaill/ The Irish Times

Growing up in north Leitrim in the 1980s, Colin Regan, a member of the Church of Ireland who played senior football for the county GAA team, remembers occasional abuse for being “a Prod”.

“It is important to put this in perspective though. I got much more abuse about the long hair and ponytail I boasted back then,” says Regan, who now serves as the GAA’s community and health manager.

His upbringing confounded traditional notions then current: “My folks raised 12 children on a small farm in north Leitrim, you don’t get much more Catholic than that,” he says.

This week, Regan, like other southern Protestants, reflected on faith and background, following the publication of Protestant and Irish, which tells a nuanced story of the Protestant experience in the Republic since independence.

Published by Cork University Press, the 18 essays edited by Ida Milne and Ian d’Alton explores experiences through the prism of cultural identity, religion, business and sport.

Regan’s story is typical, and not. His family is the largest in the small congregation of the Church of Ireland in Kinlough, situated near the top of Lough Melvin: “We are still very much at the core of the congregation.

“My sister Jean and brother Barbour are members of the select vestry. Thanksgiving, Christmas and Easter celebrations were always huge in our house as Mum would have us all involved in decorating the church.”

The story of southern Protestants captured by the book is one of inclusion and exclusion, of depopulation and renewal, but also one of resilience, often questioning long-held narratives.

Southern Protestants were one of two minorities created by partition. In Northern Ireland, Catholics were a substantial minority, constituting a third of the population, rising to almost half today.

In the Free State and then the Republic, however, Protestants were a small minority from the beginning. Their numbers dwindled from nearly 10 per cent of the population in the 1911 census to 7 per cent in 1926, a drop of a third and for reasons which remain contested to this day.

Emigration and the notorious Ne Temere decree, in which the children of mixed marriages had to be brought up as Catholic, whittled away their numbers further.

“Ne Temere was deeply resented for interfering in a family matter that should be for the couple involved to decide,” said one of the Republic’s best-known Protestants, RTÉ broadcaster, Brian Dobson.

“Its abolition in 1970 helped lessen that resentment but the sense of injustice does linger, I think, among the older generation,” says Dobson, who now presents RTÉ Radio 1’s Morning Ireland after decades at the helm of the State broadcaster’s Six One News.

For decades, southern Protestants had to live in a State with a suffocating Catholic ethos. In a famous editorial, The Irish Times, still a predominantly Protestant institution in the 1950s, said of the Mother and Child scheme that the Catholic Church “would seem to be the effective government of the country”.

Speaking at the launch of the book in the Royal Irish Academy this week, the Minister for Business Heather Humphreys, spoke of the mixed experience of Protestants in the Republic.

“I grew up in an Ireland where Protestants lived alongside their Catholic neighbours in relative harmony, but we were always mindful that we were part of a minority tradition who in difficult times kept our heads down for fear of bringing trouble or unwanted attention to our community,” she said.

She also enumerated the many prominent Protestants in the State including two Presidents of Ireland, Douglas Hyde and Erskine Childers, a former chief justice Susan Denham and a former director of public prosecutions James Hamilton.

The former minister for education Jan O’Sullivan, who is Church of Ireland, recalled a similar experience. “I felt very different growing up as a Protestant; I lived in a small village, Clonlara, Co Clare, and had to go to national school in the city (by mini-bus) while my neighbours went to the local school less than a minute’s walk from my home.”

The Church of Ireland Bishop of Cork Dr Paul Colton said wearing the wrong uniform growing up attracted unwanted attention. “I avoided certain routes to school because of some bad experiences - being stopped and head-butted once; and being pushed off my bike. But those incidents were exceptional and therefore I recall them.”

When he graduated from UCC, he was the only one who did not attend a graduation Mass. “My local rector was brought in to say prayers with me and my parents in a room in the East Wing.”

He believes Ireland now is a “totally different place in so many hugely positive ways. Diversity and pluralism are watchwords.

“Young people, for the most part, and young adults like my own sons listen in disbelief to the ‘Catholic and Protestant’ world of my childhood.”

Dobson grew up in Sandymount, Co Dublin, in a large Protestant community. Along with attending the local Church of Ireland church and school, he was also part of a panoply of organisations with a Protestant ethos, the Boys’ Brigade and the YMCA being among them.

“I don’t believe that being a Protestant made much difference in practical day-to-day life. We were told that the Protestant tradition respects individual freedom of conscience which I something I support but so too do many Catholics,” he said.

“Because it was a formative influence, I think it remains very important. It’s part of my identity and explains who I am and from where I came.”

Ms O’Sullivan said her campaigns for greater access to contraception in her early days as a politician were informed by the “Catholic doctrine that dominated policy in areas of reproductive rights in Ireland at that time.

“Obviously, that didn’t just affect Protestants and we have a much more inclusive and tolerant approach now and I am happy to have participated in all of the progressive campaigns since then,” she says.

Chris Thackaberry, a Dublin working-class Protestant who is a member of the Orange Order, says in many ways the State has evolved to adopt many of the provisions of the 1689 Bill of Rights which guaranteed certain liberties and freedom of conscience. In essence, he maintains, we are all Protestants now.