Lisa Smith has right to return to Ireland with her child, says Varadkar 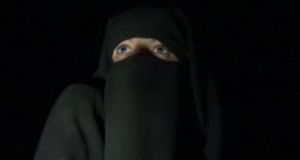 Details of an Irish woman in Syria first emerged after a TV crew working for ITV News visited a camp in northern Syria two weeks ago. Photograph: ITV

Removing Irish citizenship from an Irish woman suspected of association with Islamic State in Syria is not the right or compassionate thing to do, Taoiseach Leo Varadkar has said.

Lisa Smith (37) from Dundalk left for Syria about five years ago, after stepping down from the Air Corps where she served as a flight attendant on the Government jet at the rank of corporal.

It is understood she and her two-year-old child are currently in the Al-Hawl refugee camp along with about 500 other wives and children of Islamic State (Isis) fighters.

Speaking this morning, Mr Varadkar said more information is needed on her case.

“We still don’t have full information about this case,” he told reporters in Dublin. “Each of these cases is going to have to be treated differently.

“Going to Syria or going to live in what was called Islamic State is not in itself an offence or a crime. So we will need to carry out an investigation.

“I know the authorities there will want to interrogate her to see if she has been involved in any crimes there. But it’s very possible that wasn’t a combatant.

“We really need to get to the bottom of the facts here. Carry out a security assessment to see if the Syrian authorities want to carry out a prosecution or not.

“But ultimately this is an Irish citizen and we don’t believe that removing an Irish citizen’s citizenship from her or her family, rendering them stateless, would be either the right or compassionate thing to do.

“As an Irish citizen, she will have the right to return to Ireland as will her child. But as an Irish citizen, it’s not just as simple as coming here and proceeding as if nothing had happened. There will need to be an interrogation by the authorities there. There may need to be a prosecution there. And we’ll make sure that if she returns to Ireland, she isn’t a threat to anybody here either.”

Minster for Children Katherine Zappone said the “best interests of the child will also be attended to”.

“ I think that’s always the way the Government has operated in general – but particularly we’re aware of that in this case as well.”