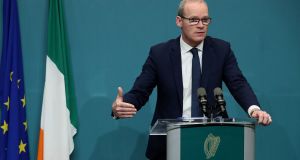 Simon Coveney said putting a time limit to the backstop without saying what would happen after that time limit ran out was a non-runner. Photograph: Brian Lawless/PA Wire

Tánaiste Simon Coveney has said the efforts of the Irish Government were now largely focused on providing reassurance and clarification to the British government to help get the Brexit deal over the line by the end of March.

As the British government announced on Sunday that it would delay the meaningful vote on Brexit from Wednesday until March 12th, Mr Coveney stood firm on the withdrawal agreement.

“We can’t reopen the withdrawal agreement for that to be renegotiated or changed, and so we are in the space of trying to provide reassurance and clarification for the British parliament to allow them to ratify this deal,” Mr Coveney told Sky News on Sunday.

However, he again said that once the deal was agreed, Ireland could offer substantial flexibility that would assuage British concerns over the Border and the backstop.

“The way to do this is to change the wording of the future relationship declaration [in a way] that can help to provide more clarity and reassurance to Westminster.”

However, he again reiterated his view that the peace process could not be diluted or diminished to placate Brexit proponents within the Conservative Party.

“You can’t ask Ireland to compromise on something as fundamental as a peace process and relationships linked to the Good Friday Agreement in order to get a deal through which is about placating a group within the Conservative Party who are insisting on moving the prime minister away from her own position.”

He said the idea of putting a time limit to the backstop without saying what would happen after that time limit ran out was a non-starter.

He continued: “This is about shared responsibility for Britain and Ireland as co-guarantors of a peace agreement in Northern Ireland to ensure we don’t go backwards.”

Fianna Fáil leader Micheál Martin also claimed Taoiseach Leo Varadkar had used “childish”comments about Britain that had the potential to have a negative impact on relations between the two countries.

Speaking on RTÉ’s The Week in Politics, Mr Martin warned that relations between the two governments had “deteriorated significantly” due to Brexit.

He said Mr Varadkar should “desist” from engaging in “childish language”, which he claimed was making the situation worse.

It is understood Mr Martin was referring to Mr Varadkar’s comments last week that Westminster was the mother of parliaments but not the “boss of other parliaments”.

“It’s very childish kind of stuff that we don’t need to be doing. It’s getting too serious for that. It’s a very serious issue.”

Minister for Housing Eoghan Murphy dismissed the criticism when appearing on the same programme. He said the Taoiseach had worked really hard on bilateral relations with Britain.