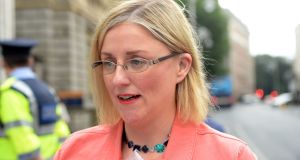 Pro Life Campaign spokeswoman Cora Sherlock: said a weekend be given to those views including the testimonies of parents of children with Down syndrome. Photograph: Eric Luke

The Pro Life Campaign has called on Ms Justice Mary Laffoy to “urgently address” what it believe is an imbalance in the presentations given to the Citizens’ Assembly.

Campaign spokeswoman Cora Sherlock said it was a “glaring omission” that consideration was not given to allowing the 99 members of the assembly to hear from those who believe the Eighth Amendment to the Constitution has been a good thing for Irish society.

She suggested that a full weekend be given to those views including the testimonies of parents of children with Down syndrome.

She described the presence of Dr Patricia Lohr, the medical director of the British Pregnancy Advisory Service (BPAS), who gave testimony on Saturday, as the “final straw”.

In her closing remarks at the end of the third weekend, Ms Justice Laffoy made a strong defence of the choice of speakers to members of the assembly who are considering the issue of abortion.

She said the assembly has consistently tried to put the medical and legal material before the members in a “factual, neutral and balanced manner”.

“This balance can be difficult to achieve in such a highly contested and controversial area. However, I want to assure everybody that the pursuit of balance has been fundamental to our work programme to date.”

Ms Sherlock said Ms Justice Laffoy’s remarks did not allay the concerns her organisation had raised.

“There are so many gaping omissions from the presentations they cannot be overlooked. There isn’t time to rectify all this with just two weekends of the Assembly remaining,” she said. “I feel the secretariat of the Assembly has a duty to acknowledge this reality and rectify the situation immediately.”

The next weekend of the assembly in March will be devoted to hearing testimonies from women affected by the Eighth Amendment and from advocacy groups based on both sides.

At the assembly on Sunday, the anti-abortion position on reproductive autonomy was given by Dublin City University ethics lecturer Dr Dónal O’Mathúna.

He stated that when individuals “get into bed with someone else, intended or unintended, a pregnancy may result and this is part of why becoming sexually active is such a momentous decision in people’s lives whether they think about that or not.

“This is also a part of why societies have urged people to reserve sexual activity until there is a permanent committed relationship there which is ready to welcome a child into society.”

This prompted a response from one of the members of the assembly who asked Dr O’Mathúna how he felt his views represented the reality of modern life.

He was also asked if he was “ignoring people’s imperfections. Is your position too simplistic?”

Dr O’Mathúna acknowledged that the idea of keeping sexual activity to committed relationships is “not the way that many people live their lives these days”.

He said he was articulating “an ideal rather than the way our world is at the moment”.

He explained: “I was trying to point out there was consequences to engaging in that position, to engaging in that type of behaviour. Some of the challenge arises where we have convinced yourselves that sexual activity is something that should be independent of pregnancy and birth.