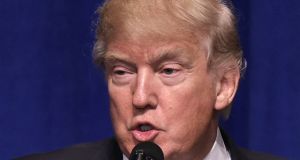 US president Donald Trump: Ministers are at odds over whether Taoiseach Enda Kenny should invite the US president to Ireland. Photograph: Mandel Ngan/AFP/Getty Images

Government Ministers are divided over whether Taoiseach Enda Kenny should invite US president Donald Trump to visit Ireland.

Mr Kenny has confirmed he will proceed with his trip to the White House on St Patrick’s Day despite protest from Opposition parties.

However, the Taoiseach has declined to clarify whether he will issue an invitation to Mr Trump to come here.

Minister for Social Protection Leo Varadkar and Minister of State at the Department of Health Finian McGrath have both said they would not support such a proposal being made.

“I’m not sure what purpose it would serve,” Mr Varadkar said. “An invite will be the Taoiseach’s decision. I wouldn’t invite him.”

Minister for Jobs Mary Mitchell O’Connor and Minister for Finance Michael Noonan have indicated they would back a visit from the president.

Mr McGrath, an Independent Alliance Minister, told The Irish Times: “I do not think we should invite him. His statements and policies are appalling and have to be rejected.”

Mr Varadkar questioned what purpose a visit would have, insisting he would not issue such a request.

Speaking last week, the Taoiseach declined to rule out an invitation to Mr Trump, saying that he would consider the question of an invitation when he was in Washington for St Patrick’s Day.

However, newspaper reports on Sunday said Mr Kenny had decided not to invite Mr Trump.

A Government spokesman then followed up stressing that Mr Kenny’s remarks still stood, but that the Taoiseach would be concentrating on raising the plight of illegal Irish immigrants in the United States when he meets Mr Trump.

Government sources stressed the importance of the meeting with the US president went beyond the occupant of the White House at any one time.

The Minister for Finance said an invitation should not be ruled out but insisted the timing must be right. Mr Noonan was strongly criticised when he welcomed Mr Trump to Ireland previously.

While Ms O’Connor claimed Ireland needed to actively work to maintain the strong links with the United States. She said she fully supported Mr Kenny in his decision to travel to meet Mr Trump.

“There are over 150,000 Irish people employed in US companies here in Ireland and I would like to make sure that there is US investment into the country,” Ms O’Connor said.

Mr Trump had planned a visit to Ireland during the election campaign but it did not proceed.

The president’s press secretary, Sean Spicer, told The Irish Times this week he would push for Mr Trump to visit if such an invitation was issued.