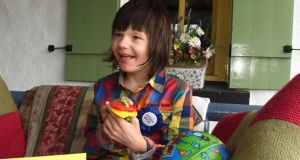 Billy Caldwell’s mother Charlotte says cannabis oil has reduced his life-threatening seizures from up to nine a week to four a month. Photograph: Keep Billy Alive/Facebook

A Co Tyrone woman whose son with epilepsy is being treated with medicinal cannabis in the US, has said she is unable to return to Ireland because the treatment is illegal here.

Charlotte Caldwell and her 11-year-old son Billy, from Castlederg, are living in Los Angeles so he can be treated for a severe form of epilepsy.

Billy is taking cannabis oil containing Tetrahydrocannabinol (THC), the psychoactive component of cannabis, to reduce the frequency and severity of his seizures while he awaits surgery.

Ms Caldwell said they are unable to travel back to Ireland because the treatment is illegal here and she does not want to be “criminalised”.

“We’re in a horrendous situation. We’re isolated from friends and family here. We’re like refugees,” she said, speaking by phone from the US.

In the Republic, a Private Member’s Bill proposing the legalisation of medicinal cannabis is progressing through the Dáil. In Northern Ireland, however, efforts to raise the political profile of the issue have been stymied by the collapse of the Assembly.

Billy was diagnosed with epilepsy as a baby and suffered up to 100 seizures a day. His mother said that at eight months, he was sent home to die by doctors in Belfast.

Ms Caldwell refused to accept that diagnosis and took him to the US eight years ago for treatment under Chicago-based epilepsy specialist, Dr Douglas Nordli.

As a result, he was largely seizure-free until last summer, when he suffered a recurrence of up to three large seizures a day. “They returned with a vengeance. I tried to access treatment for him in Northern Ireland, Britain and France, but the waiting lists were too long.”

She also sought help from private specialists in London but they said they were unable to deal with the severe long-term condition he has, according to Ms Caldwell.

The family travelled to California, where Dr Nordli is now chief of paediatric neurology at the Children’s Hospital of Los Angeles.

Doctors there believe Billy requires surgery to be able to become seizure-free, but the operation on his left temporal lobe is invasive and may affect his memory and ability to speak.

Pending surgery, he has been put on a regimen of cannabis oil containing both non-psychoactive cannabidiol (CBD) and THC. Doctors hope this may help to shrink a lesion they are trying to remove, which was located more deeply in his brain than they had originally anticipated.

Ms Caldwell says the cannabis oil has resulted in a reduction in the number of life-threatening seizures he experiences, from up to nine per week to four in a month. He will have to take the medication for two years post-surgery.

His condition has worsened recently after he developed a temperature but Ms Caldwell believes the effect of the medicinal cannabis is a lasting one.

Ms Caldwell says her son cannot be left on his own in case he suffers another seizure, the treatment for which involves administering oxygen and a rescue medicine.