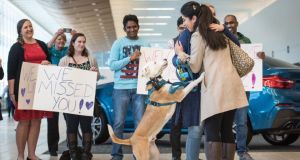 Nazanin Zinouri is greeted on Monday at the airport in Greenville, South Carolina. Zinouri, an Iranian who works for a technology firm in Greenville and has lived in the US for seven years, was initially removed from her flight in Dubai on the way back to the US after visiting family in Iran. Photograph: Sean Rayford/Getty Images

With the justice department due to file written arguments to the San Francisco appeals court by 11pm on Monday, Washington was braced for a legal showdown that will likely go to the supreme court.

Speaking ahead of the decision to troops at MacDill Air Force base in Tampa, Florida, Mr Trump struck a defiant tone, accusing the “dishonest media” of failing to report terrorist incidents.

He pledged greater investment in the military, promising to load MacDill Air Force base up with “beautiful new planes and beautiful new equipment”. “I have no higher duty than to protect the American people,” he said.

Acknowledging his “great” nominee for the supreme court, Judge Neil Gorsuch, the president continued: “Perhaps the only thing more important to me is the defence of our nation. The supreme court is so important, but we have to defend our nation. And we will do that, believe me.”

Former secretaries of state John Kerry and Madeleine Albright, together with former national security adviser Susan Rice, former CIA director Michael Hayden, and other senior security and defence experts, were among those who signed a filing to the San Francisco-based court.

Noting that they had held “the highest security clearances”, the filing stated that they were “unaware of any specific threat” that would justify Mr Trump’s travel ban.

Representatives of almost 100 tech companies, including Apple, Google, Facebook and Microsoft, also backed the Friday ruling by a federal judge, which imposed a temporary stay on the president’s executive order.

The order, the executives said, “hinders the ability of American companies to attract great talent; increases costs imposed on business; makes it more difficult for American firms to compete in the international marketplace; and gives global enterprises a new, significant incentive to build operations – and hire new employees – outside the United States. ”

With the appeals court expected to act quickly following Monday’s submissions, Mr Trump has openly criticised Judge James Robart, who delivered the ruling, accusing him of “open[ing] up our country to potential terrorists and others that do not have our best interests at heart”.

“The failing @nytimes writes total fiction concerning me,” Mr Trump tweeted. “They have gotten it wrong for two years, and now are making up stories & sources!”

The president also took to Twitter to criticise a number of polls that found his travel ban was unpopular among the public: “Any negative polls are fake news, just like the CNN, ABC, NBC polls in the election.” He added that “people want border security and extreme vetting”.

A poll by CNN found that most Americans opposed Mr Trump’s travel ban announced on January 27th, with 55 per cent of people viewing the measure as a ban against Muslims.

As the controversy over the travel ban continued on Monday, there were concerns that the issue could affect the confirmation of Judge Gorsuch as Mr Trump’s nominee to the supreme court.

“Mr Trump’s criticism of the judiciary could impact the ratification process,” said senior Democrat Chuck Schumer, the senate minority leader. “With each action testing the constitution, and each personal attack on a judge, Mr Trump raises the bar even higher for Judge Gorsuch’s nomination.”

The Denver-based judge, who was nominated by Mr Trump on January 30th, is holding private meetings this week in Washington with senior Senate Democrats and Republicans.

In an interview with Fox News, aired before the Super Bowl on Sunday, Mr Trump reiterated his admiration from Russian president Vladimir Putin. This prompted criticism from some Republicans as well as Democrats, with Senate majority leader Mitch McConnell rejecting any “equivalency” between Russia and the United States.

“I don’t think there’s any equivalency to the way the Russians conduct themselves and the way the United States does,” Mr McConnell said, describing Mr Putin as a “thug”.