End FGM website launched to warn of dangers of practice 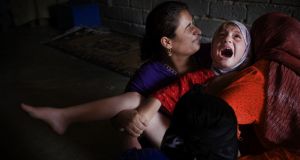 Irish medical professionals must learn about the practice of female genital mutilation (FGM) in order to provide the requisite care for women and girls who have been affected, an advocacy group has said.

On Monday Akidwa, which represents migrant women living in Ireland, launched a new online platform targeted at health professionals who may be unaware of the health risks faced by those who have undergone FGM. Over the past two years Akidwa has partnered with some 12 organisations across the EU to develop the online knowledge platform.

The United to End FGM website, which is available in nine languages, provides easily accessible information to help professionals deliver victim support more effectively, to help prevent FGM and to protect women and girls living with or at risk of FGM

Amaka Okonkwo, management and health co-ordinator with Akidwa, said it was crucial that health systems across Europe were fully equipped to provide support for women and girls who have been cut.

“Creating the awareness is what is needed now because this is happening around the world. This is no longer an Asian or African issue; it is becoming a global issue.”

FGM involves the partial or total removal of the external female genitalia with the aim of inhibiting a woman’s sexual feelings. At least 3,780 women and girls in Ireland have undergone FGM, with most coming from Nigeria, Somalia, Sudan, Egypt, Kenya and Sierra Leone.

Last May Akidwa called on the Government to develop an action plan to ensure proper protection for girls and women who are at risk.

“It’s always easier to prevent than waiting for something to occur,” said Ms Okonkwo. “This information is much needed in Ireland right now.”

At least 200 million women and girls worldwide have undergone FGM, according to Unicef. Data published last year showed that women in Indonesia, Egypt and Ethiopia account for half of all FGM victims worldwide. In Somalia, 98 per cent of women between the ages of 15 and 49 have been cut.

On Monday Unicef called on governments worldwide to enact and enforce laws and policies that protect the rights of girls and women at risk of FGM.

“It reflects the low status of girls and women and reinforces gender inequality, fuelling intergenerational cycles of discrimination and harm . . . Let us make this the generation that abolishes FGM/C [female genital mutilation/cutting] once and for all – and in doing so, help create a healthier, better world for all.”