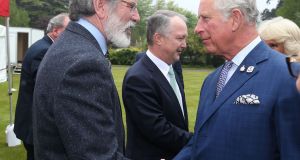 The meeting created an historical echo since it was from Glencairn that former British Ambassador Christopher Ewart-Biggs left in July 21st, 1976 moments before his car was blown up by a Provisional IRA bomb.

Mr Adams’s visit came during the last official engagement of the four-day visit of the Prince and his wife Camilla, the Duchess of Cornwall, to the Republic and Northern Ireland, the third visit in as many years.

Two years ago, the royal couple visited Mullaghmore in Co Sligo where Lord Louis Mountbatten, described by Prince Charles as his “much loved grand uncle,” was killed by an IRA bomb in 1979.

On the final engagement of their Irish visit, Prince Charles and the Duchess of Cornwall were greeted on the lawn of Glencairn by Mr Adams and other Irish political leaders.

In passing conversation with Mr Adams, Prince Charles paid his condolences to the Sinn Féin leader on the recent death of his colleague Martin McGuinness. He said that he had written to Ms McGuinness’s widow.

The prince joked with Mr Adams that the two of them were born in the same year, 1948, but that the Sinn Féin leader was a little older, being born in October and the prince in November.

Prince Charles mingled amongst 200 guest from the areas of politics, business, the law and the media in a marquee set up on the lawn Glencairn.

He was animated as he chatted informally amid a din of chatter from the crowd as drinks and cocktail sausages were passed around on trays.

The tent full of Irish dignitaries at the residences of British ambassador Robin Barnett was divided into “pods” in the meet-and-greet with the Prince. One pod comprised a group of Defence Forces personnel and members of the Garda Síochána, including Commissioner Nóirín O’Sullivan.

Another group, who were introduced by the Tánaiste, consisted of members of the judiciary, including Chief Justice Susan Denham, and the legal profession.

The prince joked a number of times with guests, including a group of politicians that included Ms Fitzgerald, Senator Paul Coghlan and Fine Gael TD Noel Rock, about his decision to show off his hurling skills on his trip to Kilkenny on Thursday.

He remarked that it was a brave thing for him to hit the ball and talked about how thankful he was that the end of the hurley was wider than a hockey stick, which he had played with before.

He might not have been to return to Ireland if he had missed the ball, he said.

Mr Adams said the Prince’s visit was, like his visit to Mullaghmore, “about reconciliation” but that there also needed to be reconciliation in the streets, along country lanes and at a community level.

“This sets a good example for everyone,” he said of this latest royal visit.

Asked whether he was cognisant of the IRA’s killing of Mr Ewart-Biggs during his visit to Glencairn, Mr Adams said that he was “very conscious of that.”

He added that he was also aware it was the anniversary of IRA hunger striker Francis Hughes’s death and that the families of 10 people shot by soldiers in Ballymurphy area of Belfast in 1971 had secured an inquest in the autumn.

“These are all regrettable events,” he said. “Thank God, they are behind us and I think one of the key points out of visits like this, and engagements like this is that we are showing a way to keep moving forward, in a peaceful way, a harmonious way, a way that brings people together.”

Mr Adams said that by meeting Prince Charles he was not stepping into the role played by the late Martin McGuinness in being the Sinn Féin representative who would meet members of the royal family but that he would play his part in future engagements.

“Wherever I can and whenever I can, I want to be part of all of this,” he said.

“The history is the history. It is really, really important but the future hasn’t been written and we need to write the future and it needs to be, particularly in these Brexit days, a history which is based upon the best that we can possibly get for all the people of this island.”