About 1,000 people employed by 14 closed businesses inside safety cordon 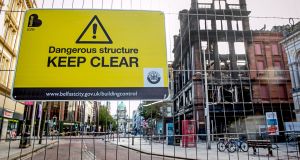 Primark has confirmed it will pay staff affected by the fire that gutted its flagship Bank Buildings store in Belfast, 10 days ago, until the end of the year.

The retailer said on Friday that staff will be paid until December 31st. They will be relocated to other Primark stores by September 17th; the company is holding discussions with employees who may have to pay more to get to and from work as a result.

About 1,000 people are employed by 14 businesses that are unable to trade because of a safety cordon around the Royal Avenue site, where engineers are assessing the structural integrity of the listed building. The future of staff on zero-hours contracts at companies like McDonald’s is not known.

Primark says it is “committed to the city of Belfast”, that it has been “working hard to identify suitable premises for a replacement Primark store” and that it is working closely with authorities “to determine the best approach to reducing the size of the safety cordon as soon as feasible”.

Land & Property Services, part of the Northern Ireland Executive Department of Finance, is revising the rateable value of the 14 properties inside the cordon; it has said rates will then be suspended, meaning the businesses will not have to pay their bills from the date of the fire, August 28th. The agency will also consider measures to help other businesses affected by the street closures.

Belfast’s Deputy Lord Mayor, the Alliance Party councillor Emmet McDonough-Brown, said: “It’s welcome that businesses affected by the Primark fire will not have to pay rates for the period which they are closed. The council should consider a programme of animation for the surrounding streets to support footfall and traders in the run-up to the busy Christmas period. Belfast city centre is the core of the retail offer, and we should all support traders at this time.”