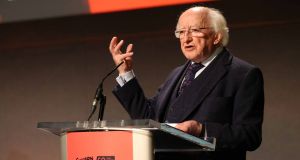 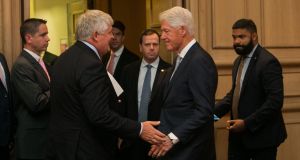 President Michael D Higgins has taken aim at the world’s most powerful countries, condemning the five permanent members of UN security council for being behind the bulk of global arms exports.

In a keynote address to a conference marking the 50th anniversary of Irish aid agency Concern, Mr Higgins criticised the security council, the UN’s most powerful body, to which Ireland is seeking election for the 2021-22 term.

Speaking at Dublin Castle, the President warned that the five permanent members - China, France, Russia, the UK and the US - were embarking on “a new arms race” and that the arms industry was exporting “weapons of death and destruction” for use in Syria, Yemen and the Democratic Republic of Congo.

“The self-defeating rhetoric of the arms race, the immorality of the arms trade, can only serve as infrastructure to fuel current and future wars,” he told the audience at the Resurge 2018 conference, which included UN deputy secretary-general Amina Mohammed, a former Nigerian environment minister.

Mr Higgins said tackling conflict by promoting sustainable development, gender equality and combatting climate change can only be achieved if all UN member states show “the necessary political will”.

Mr Higgins was one of a number of speakers to call for greater diplomacy to find political solutions to conflicts in South Sudan, Nigeria, Somalia and Yemen that were political in nature.

Ms Mohammed told the conference that the Northern Irish peace process could be used as a guide to end conflicts and engage more proactively “to prevent those that are threatening to break out daily.”

“The Good Friday Agreement taught us that to end conflict, we must create space for dialogue. We must establish trust and both political parties and people must show courage and compromise,” she said.

Former US president Bill Clinton urged Northern Ireland’s parties to “take a deep breath, keep the agenda out there and keep working” to restore the devolved government at Stormont.

He said he understood why Northern politicians would not want want to go into government while there was uncertainty around Brexit “because how would you know what the terms of the agreement were.”

Introduced by businessman Denis O’Brien, who helped fund Concern’s anniversary conference, Mr Clinton praised the work of the peace process and Concern as both were rooted in the notion of what he called “inclusive tribalism” where people respected differences in others but could still find common ground. He also said he felt that women’s groups never received the credit they deserved for the peace.

The former president said that it was “not a good time for us now”; liberal democratic parties were “getting the hell beaten out of us in elections all over the world” and people were scared of immigration.

“Average people who feel stuck in their own lives don’t have any space left to be generous to others,” he told an audience of several hundred people.

Ms Mohammed told reporters she hoped there would be a “recognition” of the UN’s efforts to be more efficient and responsive when US president Donald Trump, who has withdrawn funding from UN groups, chairs the security council during the annual gathering of world leaders in New York this month.

Addressing Mr Higgins’s concerns about a new arms race, she said she hoped the UN secretary general’s efforts at disarmament and preventing armed conflict might “reverse” the trend on rising arms exports.