Posters appeared in Derry city centre and have now been removed 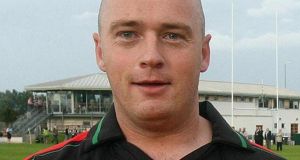 PSNI constable Peadar Heffron was injured by a booby-trap bomb that exploded under his car in 2010. File photograph: Paul Faith/PA Wire

The North’s deputy chief constable has condemned as “cruel and disgusting” posters which used an image of a police officer injured in a dissident republican bombing to try to prevent people from joining the Police Service of Northern Ireland.

The posters appeared in Derry city centre on Wednesday morning, and have now been removed.

They featured a photograph of Peadar Heffron, a Catholic former police officer who was seriously injured when a bomb exploded under his car in 2010.

Sinn Féin MLA Martina Anderson and Foyle MP and SDLP leader Colum Eastwood said it was clearly an attempt to intimidate the people of the city.

The PSNI said it was aware of posters circulating in the Derry area.

Deputy chief constable Mark Hamilton said the posters “can only be described as cruel and disgusting and have clearly been created by those who fear a fully representative police service”.

“The cowards who hide behind this fake rhetoric and who ridicule the resolve, commitment and bravery of every person who works every day to keep each of you safe have nothing to offer our society and should be condemned by all right-thinking people.

“I would urge anyone who comes across these posters, either online or physically, not to share or circulate this material further.”

On Tuesday the North’s Deputy First Minister, Sinn Féin’s Michelle O’Neill, and Sinn Féin MLA Gerry Kelly revealed they had been warned by police that they were under threat of attack from dissident republicans because of their support for a new PSNI recruitment campaign.

Both Ms O’Neill and Mr Kelly attended the launch of the campaign last week, the first time members of their party have done so.

The chief constable, Simon Byrne, said their presence was a “significant step” towards making policing more representative and encouraging more Catholics to join the PSNI.

A banner bearing the slogan “British State Media” was also erected on the gates of the Andersonstown News offices in west Belfast after advertisements for the campaign were carried in the newspaper.

Mr Kelly described it as “another sinister attempt to intimidate journalists and silence the media”.

Ms Anderson said the posters erected in Derry were “crass and grossly offensive” and everyone “should have the right to choose their career path free from any fear or intimidation”.

The party,” she said, “is working to achieve an accountable, civic and representative policing service which polices with all the community.

“Those responsible for erecting these posters have nothing to offer, they have no politics and no strategy to achieve anything. It’s well past time they got off the backs of the community.

“This tactic is disgusting and disgraceful and comes from an unrepresentative groups [sic] with little support in the community.”

Mr Eastwood said he strongly condemned the posters and the groups behind them.

“Those responsible for erecting these posters have nothing to offer the people of the North and they must get off the backs of the local community,” he said.

“The SDLP is resolutely committed to a diverse and inclusive PSNI, which serves the whole of our community. Anyone should have the right to follow their chosen career path without fear of intimidation or attack.”

Gary Middleton, DUP MLA for Foyle, said the use of the image of Mr Heffron was “particularly depraved and repulsive”.

“The PSNI is a police service for everyone in Northern Ireland. Constable Peadar Heffron served the entire community and these disgusting images cannot undo his service or that of current police officers and staff, from whatever background they come,” he said.

“Dissident elements will not succeed in their attempts to take us backwards. These posters, however, demonstrate once again the importance of a united community stance, not just in opposition of those who would threaten or use violence, but pro-actively in support of choosing policing as a career.”

Chair of the North’s Policing Board, Professor Anne Connolly, said that as a Board they condemned those responsible for the “deeply offensive posters”.

“The attempt to threaten and intimidate potential applicants to the Police Service in this way is vile,” she said.

“We welcome the widespread political and community condemnation that has been voiced in response and for the support that is being given to the latest PSNI recruitment campaign.”