‘I have had a wonderful life’: Keelin Shanley remembered at funeral 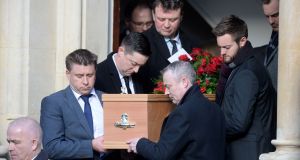 Keelin Shanley’s fearless journalism, her curiosity to learn and tell the stories of others, and, most of all, her “wicked” sense of fun were celebrated at the RTÉ broadcaster’s funeral.

The award-winning journalist died on Saturday at the age of 51 after a long and intermittent battle with cancer. She was remembered fondly at a “celebration of a full life” at a service in St Paul’s Church in Glenageary, south Dublin, not far from her home in Dun Laoghaire.

In a moving and often funny eulogy to Ms Shanley, her husband Conor Ferguson thanked people for coming to “celebrate what Keelin saw as a very full life”.

He spoke about his wife’s “humble gumption” where she did not think she was different or special to others but was driven by a “spirit to just get on with it.”

This made Keelin “very dogged and determined in her work to do her best,” he said.

Whether it was interviewing “gangsters in Cabra” for a programme or visiting a lawless prison in Venezuela or reporting on sex trafficking in Romania or “buying a crazy, falling down house in Dun Laoghaire and doing it up”, Keelin never considered “what if things go wrong?” he said.

“She just loved her work. She loved people and she loved stories,” he added.

A “long-lost” cousin told Mr Ferguson in the days since her death that he had only met Ms Shanley once at a party but she was able to find out everything about him from their brief encounter.

“I was chatting to her for an hour and she got it all out of me,” he recalled his cousin saying, eliciting laughter in a packed church.

The chief mourners at the humanist ceremony were Mr Ferguson, their children Lucy (13) and Ben (10), her father Derry and stepmother June, her brother Eoin and sisters Muireann, Emma and Niamh, her extended family and her many friends and colleagues.

Among those in attendance from RTÉ were the chairwoman of the board Moya Doherty, director-general Dee Forbes, managing director of news and current affairs Jon Williams, RTÉ director of audience, channels and marketing Adrian Lynch and director of content Jim Jennings.

Scores of friends and colleagues attended from RTÉ, from Prime Time and the RTÉ newsroom to the legal and make-up departments, and across the broadcaster’s television, radio and online platforms, reflecting the breadth of Keelin’s work during her quarter-century at the broadcaster.

In his tribute to his wife, Mr Ferguson talked about being overwhelmed by the outpouring of love shown after Ms Shanley’s death where he and his children found themselves “at the centre of a national tragedy.”

Keelin was described as “fearless and funny.” Mr Ferguson said she showed great humour even in the final weeks of her illness following the deaths of high-profile RTÉ colleagues.

“If anything, she said, bloody Gay Byrne, Marian Finucane, Larry Gogan - who’s going to give a crap when my time comes; they’ll be worn out’,” he recalled, again to laughter from mourners.

A bunch of red roses sat on the top of Ms Shanley’s coffin.

The celebrant of the ceremony Susie Kennedy said that Ms Shanley would “be greatly missed in her public role as a journalist of great integrity, energy, professionalism, intelligence and compassion.” She spoke of Ms Shanley’s “positivity, her zest for living every minute of life to the full.”

“Keelin was a woman of enormous humour, intelligence, talent and creativity,” she said.

In a heartfelt and humorous tribute to his big sister, Ms Shanley’s brother Eoin said that Keelin told him a week ago: “I have had a wonderful life.”

Ms Shanley’s friend and RTÉ colleague Niamh O’Connor said in her eulogy that Keelin had “pioneered a form of social journalism” with her reports and documentaries on poverty, health, inequality, homelessness and prescription drug use during the early 2000s.

“For Keelin, telling important stories was like breathing or walking or talking, but wherever she was, and whatever story she was telling, her journalism at its core had compassion and humanity,” she said.

Everyone who worked with her recognised from Keelin that “the voices on the boardwalk were as deserving of a platform as those in Buswell’s,” said Ms O’Connor.

A photograph of a laughing Ms Shanley swimming at the Forty Foot near her home in Dublin adorned the back of the funeral booklet. It was an activity that her husband said she loved.

Liam Ó Maonlaí and Fiachná Ó Braonáin of the Hothouse Flowers played This Is The Sea by The Waterboys during the afternoon ceremony.

They were joined by Julie Feeney and Steve Wall, frontman with The Stunning, for a rendition of Lou Reed’s Perfect Day that concluded the tribute to one of Ireland’s best-known journalists.

1 Coronavirus: 396 more cases as public is urged to help protect ‘older and vulnerable’
2 The Sack of Balbriggan: The burning of a town that shocked the world 100 years ago
3 Coronavirus: Germany and Iceland look set to be taken off ‘green list’
4 Martin ‘seriously concerned’ at Covid complacency amid pressure over church events
5 Lockdown measures and rising anger in Madrid as Covid takes hold again
Real news has value SUBSCRIBE