Planting the tricolour: The forgotten Irish expedition to claim Rockall

Disputed outcrop ‘was quite difficult to find ...This was long before GPS’ says son of navigator 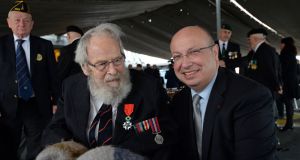 File photograph of Michael d’Alton , a veteran of D-Day (left) after being presented with the Chevalier de la Légion d’Honneur , by Jean-Pierre Thebault, Ambassador of France. Photograph: Eric Luke 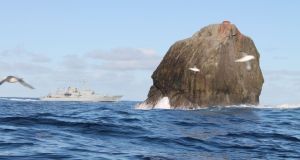 Approaching Rockall in a rubber dinghy was difficult in the heavy seas, but when the little vessel got close enough to the rock, Willie Dick jumped. Clinging to a skirt of seaweed, he hauled himself up from the water and climbed to the top, where he planted the tricolour.

That is how, nearly 45 years ago, the tiny Atlantic outcrop at the centre of a territorial dispute was claimed for Ireland, according to the son of one of the expidition’s members.

On July 8th, 1975, a yacht named the Verve sailed from Dublin Bay to Rockall, some 418km (260 miles) west of the Co Donegal coast. On board were skipper Paul Campbell, John White, Willie Dick – the man who would make the ascent – and navigator Michael d’Alton.

D’Alton was a second World War veteran who was present at the D-Day landings. He died in 2016 aged 95, just over a year after being made a Chevalier de la Légion d’Honneur by the French government for his part in the Battle of Normandy.

“He was probably one of the best navigators in Dublin Bay at the time,” d’Alton’s son, Mark, told The Irish Times on Sunday. Yet, despite his experience, Rockall proved to be a tricky destination.

“This was long before GPS,” says Mark. “From a navigational point of view, Rockall was quite difficult to find – it’s not a very big thing.”

The navigator, who also rowed the dinghy, recalled the story in a letter to The Irish Times on June 6th, 1985. The letter followed another landing by UK man Tom McClean. D’Alton sought to set the record straight, “just in case our claim to it might be ‘jumped’ by a mere blow in.”

“Now that someone from the United Kingdom – a Scot it would seem from his name – has made a landing on Rockall from the sea, it appears to me that it is time that it should be placed on record that a sailing man from Ireland, in an Irish yacht, did so almost exactly ten years ago,” he wrote.

D’Alton wrote that Dick was probably the first man to ascend Rockall from the sea since Lieutenant Basil Hall in 1811; “Hall’s Ledge”, a small level surface on Rockall, is named after the naval officer.

Once at the top, Dick made measurements of the rock, finding it to be 57 feet high – “although the Admiralty think that it is 63”. D’Alton, from his position on the dinghy, measured the circumference of the structure and settled at 276 feet.

The younger d’Alton says he understood from his father’s stories that Dick left a tricolour at the summit before the men returned to the Verve.

In his letter, d’Alton senior detailed another mark they left behind: “Willie also marked, with great care, ‘Verve i c c 1975’ on the bronze plaque fixed at Hall’s Ledge, presumably in 1955 when the UK purported to annexe it by lowering men from a naval helicopter – surely an inadmissible method of doing so, since it always has been accepted that this must be accomplished from the surface of the earth, whether this be land or sea.”

Mark D’Alton was speaking to the Irish Times on Sunday after a fisheries dispute deepend between Ireland and Scotland. Last week Scottish external affairs minister Fiona Hyslop warned the Irish Government Scotland will deploy its vessels to protect Scottish fishing rights around the tiny islet 418km west of the Donegal coast.

Ownership has been disputed between the State and the UK for decades. However, although the UK has claimed sovereignty over the area, it has never sought to claim the fishing rights now claimed by Scotland.