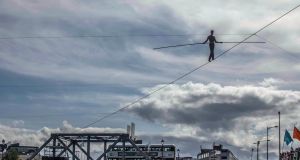 Ireland is particularly aware of the threat climate change poses through sea level rises, given its island status, Tánaiste Simon Coveney has said.

Mr Coveney and Minister for the Marine Michael Creed are leading the Government’s participation in the 2019 SeaFest and Our Ocean Wealth Summit in Cork this week.

Ahead of the conference, Mr Coveney welcomed the leaders and ambassadors from more than 30 island states such as the Seychelles, Mauritius, Antigua, Haiti, Barbados, Fiji and Papua New Guinea.

“As a small island, Ireland understands the threats climate change poses to our friends in the Pacific, Caribbean, Atlantic and Indian oceans. It threatens their very existence,” Mr Coveney said.

“Ireland strongly believes that we can only address this challenge of a generation if we take strong climate justice approach. Emphasising the needs and realities of those who have the most to lose, yet have done least to contribute to the problem, will always be a centerpiece of our approach.”

Mr Coveney said Ireland wants to give leadership on the important issues of protecting the seas and maritime environment and countering climate change.

The ocean summit will address issues such as sea tourism, maritime industry, fishing, sailing, research and the military . It is being attended by a number of major international figures such as former president Mary Robinson and former US secretary of state John Kerry.

Among the other dignitaries attending is Danny Faure, president of the Seychelles , who earlier this year made an impassioned plea – from more than 100 metres under the sea – to protect the “beating blue heart of our planet”.

Currently just 5 per cent of the world’s oceans are protected but countries have agreed to increase this to 10 per cent by 2020 . However, environmental campaigners say between 30 per cent and 50 per cent of the oceans outside nations’ territorial waters should get protected status to ensure marine biodiversity.

Mr Coveney said the central theme of this week’s summit ‘shared voices from small island nations’ will focus on the importance of protecting the world’s oceans from the impacts of climate change, for island nations in particular, to ensure a sustainable long term future for the marine economy.

Among the other guests are Peter Thomson, UN Special Envoy for the Ocean, the foreign minister of Malta Carmelo Abela and UN permanent representatives from a number of countries including Jamaica, Vanuatu, Antigua and Barbuda, Marshall Islands and Palau.

Meanwhile Mr Creed said that it was clear that “the already present threat posed by climate change is the key challenge of our time and we need to plan for the sustainable future of our marine sector in the context of global ocean challenges.

“The seas and oceans are the foundation of our marine sector and this year’s summit will focus on the wider context of our shared global ocean resource and how to protect it to ensure a sustainable long term future for the marine,” added Mr Creed.

The start of the Oceans Wealth Summit coincided with the SeaFest2019 event which saw thousands of visitors flock to Cork for a over 100 free maritime events, centred on the Port of Cork in the city centre but also at other locations around Cork Harbour.

Among the highlights was tightrope artist, Chri Bullzini performed an aerial walk along a 120m tightrope across the River Lee from the middle of Clontarf Bridge to City Quarter, Lapps Quay at 4.30pm .