Rockall: Scottish will board Irish boats if they refuse to leave - Minister 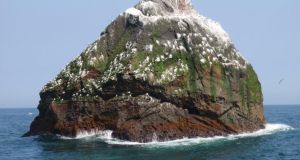 Scottish fisheries minister Fergus Ewing has said his government’s fisheries patrols would “invite” Irish fishing boats to “cease and desist” from what he said was “illegal” fishing around Rockall.

The Scottish government has said its fisheries patrols will board Irish fishing boats if they refuse to leave the waters around Rockall, as the row over fishing rights at the tiny North Atlantic islet escalates.

Scottish fisheries minister Fergus Ewing has said his government’s fisheries patrols would “invite” Irish fishing boats to “cease and desist” from what he said was “illegal” fishing around Rockall.

If they refuse, he said, “the vessel would be boarded and action taking in accordance with law”.

Mr Ewing repeatedly said the Scottish government believes that fishing by Irish boats within a 12-mile zone around Rockall is illegal, a view strongly rejected by the Irish Government.

“We will be taking appropriate action under the law to ensure illegal activity ceases,” he told RTE’s This Week programme.

“The Irish Government should tell its fishermen to cease and desist,” he said.

He said that the Scottish government was clear that it would now take “enforcement action” against Irish boats in the area.

Minister for Agriculture and Fisheries Michael Creed said that Ireland had never accepted the UK’s claim over Rockall and Irish fishermen were legally entitled to fish near the rock under EU law.

He said that Dublin was ready to bring the dispute to either UN or EU courts to be resolved. He added that escalating the dispute by sending Irish naval vessels to protect fishermen there would result in “escalating” the dispute.

However, the Sinn Féin TD for Donegal Pearse Doherty has said that if the Scottish government’s patrol vessels seek to board or detain Irish fishing boats near Rockall, then the Irish Government should deploy its sea fisheries patrols to protect the Irish boats.

He said that this would represent a failure of diplomacy, but if the diplomatic route fails, “of course we need to deploy our sea fisheries protections vessels”.

Irish fishers have said they are not going to accept the warning and will contiune to fish there as normal. On Saturday chief executive of Killybegs Fisheries Organisation Seán O’Donoghue said the warning came as a bombshell.

“If there is an enforcement by the Scottish authorities we will rigorously defend it [our fishing] and we expect and we believe that the Irish Government will fully support in that action,” Mr O’Donoghue said.

“They [THE FISHERMEN]are very disturbed about it and they are very concerned, given that they have traditionally, over the last decade, fished both inside and outside the 12-mile zone in Rockall, without any problem,” Mr O’Donoghue said.

“We never saw that there was an issue. We were absolutely shocked when the Minister announced to us that the Scottish authorities declared that they were going to enforce an exclusive zone around Rockall.

“Obviously we have people there, they were fishing there yesterday and there are some there today, as would be normal practice. They are very concerned about this development. To be perfectly honest it came as a bombshell, they just couldn’t believe it, that this action was being taken by Scottish authorities.”

Mr O’Donoghue said about 10-12 vessels operate in the area, with “quite a number” of those from Co Donegal.

“This is an important part of their income, particularly in relation to haddock and squid – they’re the two main species they would be concentrating on, but there are others as well,” he added.

“It is only during the summer months that you really can exploit it . . . You can only go there in relatively good weather, so at winter time you would rarely see vessels there, maybe just one or two.”

The Scottish Fishermen’s Federation said it “fully supports” the Scottish government’s stance on Rockall and that Irish vessels “have no legal right to fish within 12 nautical miles”.

“The area is recognised in UK law as part of Scottish territorial waters and hosts multimillion-pound haddock, monkfish and squid fisheries that are hugely important to our fleet,” the federation’s chief executive, Bernie Armstrong, said in a statement.

“The Scottish government is right to impose compliance, full stop. But at a time when we are moving towards independent coastal state status, it lays down a benchmark for the future.”

Rockall is a tiny uninhabitable islet in the North Atlantic, whose ownership has been disputed between the State and the UK for decades. However, although the UK has claimed sovereignty over the area, it has never sought to claim the fishing rights now claimed by Scotland.

The diplomatic dispute has been festering for months, with the Scottish government intensifying its complaints to Dublin about what it says is illegal fishing activity by Irish vessels around Rockall.

Last week, in a formal letter of notice, Scottish external affairs minister Fiona Hyslop warned the Irish Government that Scotland will deploy its vessels to protect Scottish fishing rights around Rockall, which is about 418km west of the Donegal coast.