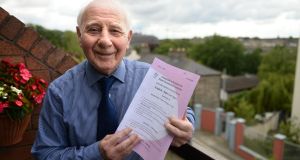 Anthony Lynam left school as a youngster in 1955 without ever sitting a major exam.

Now, at 80 years of age, he has finally set that right – and become one of the oldest students to ever take on the Leaving Cert.

“I just got the notion last year,” says Mr Lynam, a former piano technician who lives on his own near Kilmainham in Dublin.

“You hear so much about education today and how important the Leaving Cert is. I didn’t have any intention of studying the exam. I was just interested in learning.”

Mr Lynam left secondary school in Crumlin when he was about 14, at a time when a minority of students went on to complete the Leaving Cert.

Going through the past papers, I hadn’t a clue what they meant by some of the questions, but we were taken through it very well by the teachers

“It was before free education. Most left after primary school. I was unusual in staying on for an extra two years. We had to pay two guineas.”

“The college was wonderful, absolutely fantastic,” he says. “I picked English because it was something I was familiar with . . . I’m not a great reader, or anything. So, I found it quite daunting.

“Going through the past papers, I hadn’t a clue what they meant by some of the questions, but we were taken through it very well by the teachers.”

He says he enjoyed studying Macbeth – and happily recites quotations from the play – as well as The Great Gatsby.

For the poetry, he focused on WB Yeats, Brendan Kennelly and Séamus Heaney. Thankfully, he says, his choices paid off during the exam.

His age also helped, he says, when it came to writing the essay.

“There was a question about writing about your experiences of travel and the impression it made on your life,” he says. “I enjoyed that. I’ve been to a few places, all right.”

The most daunting part, he says, was the volume of writing required over the six hours of the two exam papers.

“The speed was challenging. But I got there in the end . . . I did a lot of competitive running in my earlier days and you learn about stamina and willpower. I think that stood to me.”

The State Examinations Commission said it could not confirm whether Mr Lynam is the oldest student to sit the exams for data protection reasons.

Kathy O’Neill, director adult learning at the Crumlin College of Further Education, says Mr Lynam is probably the oldest student the college has had to date.

“It’s the culmination of a great personal effort and, for Anthony, it has been transformative,” she says.

“We get all sorts of students who go back to do the Leaving for all sorts of reasons, such as retraining to be a primary teacher; foundation Irish for new citizens who want to help their children in school . . . these days, you only need one subject to fulfil the need to progress to further study.”

As for Mr Lynam, he is full of praise for the support he received and would encourage anyone to return to education.

“It’s been a great journey, a great experience. I feel very enriched by it all. I wasn’t much of a reader before, but’s got me reading,” he says. “Now when people talk about the Leaving Cert or exams, I know exactly what they are talking about.”