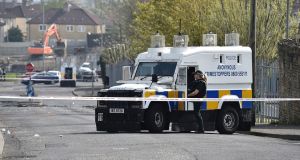 Republican and loyalist paramilitaries remain a “clear and present danger” in Northern Ireland, the Independent Reporting Commission (IRC) has stated in its third annual report.

The commissioners, in their report published on Tuesday, called for actions to assist deprived communities where paramilitaries continue to have “coercive control”.

The IRC also acknowledged that in some areas, paramilitary groups are viewed as the “go to” people to deal with anti-social problems.

The four members of the commission said they understood from police that there were thousands of “signed up” paramilitary members and while “only a relatively small number” were directly involved in illegal activity, they represented a “clear and present danger on an ongoing basis”.

The commissioners also warned that issues around Brexit and dealing with the past had the potential to “further and greatly complicate” the ending of paramilitarism.

The IRC was established in August 2017 by an international agreement between the British and Irish governments under the terms of the 2015 Fresh Start Agreement at Stormont.

Unlike the disbanded Independent Monitoring Commission, it does not provide operational assessments on the status and threat level from republican and loyalist paramilitary organisations. Its remit is to report on progress towards ending paramilitarism.

The commissioners said that the restoration of the Executive and Northern Assembly in January following three years of political deadlock provided a major opportunity to “reset” the mission to end paramilitarism.

They repeated their view that ending paramilitarism requires a” twin-track approach, combining policing and criminal justice responses alongside measures to address the systemic socio-economic challenges facing communities where paramilitaries operate such as educational under-attainment, long-term unemployment, poverty and drugs”.

This would require a “whole of government focus”, they said.

They added that there were “still too many communities in Northern Ireland and many individuals and families in local communities who remain under the coercive control of paramilitary groups”.

“We appreciate that peace processes everywhere move at a slow and uneven pace and that there are many complexities to be overcome in their implementation. There are always multiple reasons why progress is difficult,” they added.

“However, it is also the case that there is a ‘time and a tide’ for movement; moments for leaps rather than increments. We believe that in a year in which a pandemic has swept our world and in many ways turned that world upside down, it is time for momentum and movement again on this residual, stubbornly difficult issue of ending paramilitarism, which we consider to be pivotal to the transformation of Northern Ireland society.”

The commissioners also reiterated their call for the Executive to “consider setting up a dedicated Northern Ireland agency for the civil recovery of the proceeds of crime to further bolster the fight against organised crime”.

The commissioners allowed that there were differing attitudes in the communities where the paramilitaries operate. “For some in these communities, they regard paramilitaries not as outsiders but as ‘part of us, part of who we are’,” they said.

“And in some cases, the paramilitaries are seen as ‘go to’ people, particularly in terms of ‘policing’ local issues arising from anti-social behaviour, including drugs. While this, in our view, is unacceptable, it is the reality of the complex landscape in Northern Ireland,” they added.

Welcoming publication of the report the North’s justice Minister Naomi Long said that the Executive had an action plan to tackle paramilitary activity.

She said that while “good progress is being made” in this area “lessons learned so far only serve to underline how the enduring and pervasive nature of paramilitarism requires a long term, collaborative approach if we are to effectively resolve all of the issues”.