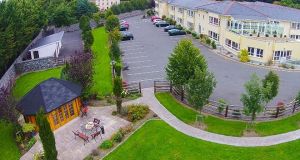 The Ryevale Nursing Home in Co Kildare recorded 40 confirmed or suspected coronavirus deaths and 58 residents and 69n staff became infected, in what was one of the worst virus outbreaks affecting a care facility during the pandemic.

In one of the worst Covid-19 outbreaks affecting a care facility during the pandemic, some 69 staff at Ryevale Nursing Home, a family-run facility in Leixlip, tested positive for the virus, forcing the care home to redeploy workers and seek staff from the HSE and outside agencies.

The latest batch of inspection reports from the Health Quality and Information Authority shows how a handful of nursing homes experienced severe outbreaks and multiple deaths.

Nursing homes have borne the brunt of the coronavirus pandemic in the State, accounting for more than half of almost 2,000 Covid-19 related deaths.

The Hiqa reports focus on inspections, some unannounced, in July and August at nursing homes with a high concentration of deaths in commuter areas around the greater Dublin region.

Marymount Care Centre in Lucan, Co Dublin reported the deaths of 29 residents in an outbreak described to Hiqa as “devastating and a body blow” to the nursing home.

Larchfield Park Nursing Home in Naas, Co Kildare reported the deaths of 20 residents during a Covid-19 outbreak that began in late March and that infected 41 out of 64 residents.

During the outbreak, some 34 of the nursing home’s 86 staff members tested positive for the virus, resulting in “one week of significant nursing staff shortages”, though the care facility made “significant efforts” to ensure at least two nurses on duty at night and three during the day.

The reports show that even the most compliant facilities meeting healthcare standards and with a good regulatory compliance record struggled with the virus once it entered the care homes.

The watchdog found that Ryevale managed to maintain a safe service despite 98 residents - two-thirds of its maximum occupancy - testing positive for the disease after an outbreak in April.

The virus posed “significant staffing challenges” for two to three weeks at the peak of the outbreak but the home ensured at least one nurse was on duty at all times in each of its five units.

Hiqa received nine items of unsolicited information about issues at the nursing home during the outbreak but the facility was found only to be non-compliant in the area of risk management, which required review and strengthening, out of inspections carried out under 14 regulations.

Management at Marymount in Lucan, which was found to be fully or substantially compliant under 13 regulations checked, told Hiqa’s inspectors that the Covid-19 outbreak “had affected all residents, staff and the managers themselves deeply.”

“They were sincerely saddened and emotional about the loss of residents and the impact the pandemic has had on life in their centre,” the inspection report says.

The report details the lengths the home went to during the outbreak to manage: relatives of the management volunteered to help with communications during the acute phase of the crisis.

Larchfield was found to be non-compliant under three of 13 healthcare regulations checked by the regulator: infection control, governance and management, and fire precautions.

The regulator issued the nursing home with “an urgent compliance plan” and requested a “deep clean” to address “unclean areas, items of equipment and furniture that were found to be unclean or damaged.”

Overall, out of 30 inspection reports on residential centres for older persons, Hiqa found evidence of non-compliance with the healthcare standards and regulations in 20 care facilities and evidence of good practice in the other 10.

Hiqa includes details of how nursing home residents were coping following severe outbreaks and with visiting restrictions and window visiting with family members.

At Marymount, during the unannounced inspection in July, some residents expressed concern for staff with Covid-19 and that they “prayed fervently for them all during the outbreak.”

“They talked sadly about the regrettable deaths of some of their friends,” says the report.

Residents who had recovered from Covid-19 remarked about “the attentiveness of staff when residents showed signs and symptoms.”

“A number of residents said staff did everything in their power to help them feel well again,” says the report.

“A number of residents expressed their gratitude to the committed staff who had cared for them successful in their home without the necessity of having to be transferred to hospital.”