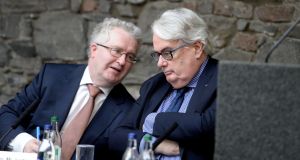 The board of the Judicial Council will meet on Tuesday for a quickly-arranged general assembly to discuss the serious Constitutional crisis caused by the standoff between Chief Justice Frank Clarke and his Supreme Court colleague, Justice Séamus Woulfe.

The meeting of the 11-person board will be convened by video link at 4.30pm. The meeting has no set agenda and is being portrayed as a “general discussion”.

While some legal sources say they do not expect anything conclusive to emerge, others say the controversy surrounding the so-called ‘Golfgate’ incident cannot be ignored, especially since it is now becoming clear the Oireachtas will not deal with the issue.

Earlier today the Government agreed it will not take any further action on the Séamus Woulfe affair. The decision was taken at Cabinet this morning, The Irish Times understands. This means the prospect of Mr Woulfe facing an impeachment motion in the Dáil is increasingly unlikely.

The process of appointment of Mr Woulfe to the Supreme Court is likely to dominate Leaders’ Questions in the Dáil on Tuesday afternoon, with Opposition parties demanding a full statement from Minister for Justice Helen McEntee.a

Mr Woulfe, who was a senior counsel, was named by the Judicial Appointments Advisory Board (JAAB), as its sole nominee.

At least three judges expressed an interest in the Supreme Court vacancy but Ms McEntee did not inform Taoiseach Micheál Martin of this. Labour and Sinn Féin have both called for her to answer questions about why she did not do so.

In bringing forward a recommendation to Cabinet the Minister for Justice must also consider the interests of serving judges who do not apply to JAAB but instead indicate to the Attorney General they are interested in a senior judicial role.

Their names are then kept on file in the Department of Justice.

The former Independent Minister Finian McGrath has contended that he and his Independent Alliance colleague Shane Ross were informed of the person nominated in advance of Cabinet meetings and would then argue their merits with the serving minister for justice.

“There were a couple of occasions before Cabinet meetings (where) we spoke outside the cabinet meeting. Shane (Ross) and I would go into a room. And if we heard of nominations we had a private meeting before the cabinet meeting, and the Minister of Justice would say, ‘listen, I’m bringing a nomination here for (a vacancy), what do you think?’

That assertion was flatly contradicted by a former minister with extensive experience of Cabinet who refuted any suggestion that discussions or deal on judicial appointments took place outside Cabinet in the manner described by Mr McGrath.

“It did not happen,” said the former minister, who declined to be named citing Cabinet confidentiality.

Mr McGrath said that he and Mr Ross - who initiated legislation to reform the judicial appointments system - had arguments in Cabinet meetings about nominations to the higher courts.

“We used to have rows about and to be quite honest. The bottom line is that we would raise those issues. Any member of Cabinet who is worth their salt would have raised those fundamental simple questions,” said Mr McGrath speaking on Today with Claire Byrne on RTÉ Radio.

He said if the last government had been more amenable to Mr Ross’s reforms, the current crisis would not have occurred.

The Government has rejected Opposition requests for a debate or statements on the details of Mr Woulfe’s appointment on the basis that it would interfere with the separation of powers.

There are also divided views among lawyers and judges about the publication of the correspondence between Justice Clarke and Justice Woulfe.

As he arrived for the weekly meeting of the Cabinet on Tuesday morning, Green Party leader and Minister for Transport Eamon Ryan said politicians should be careful to avoid debating judicial appointments in a personal manner.