Over 7,000 trees felled by local authorities in 18 months 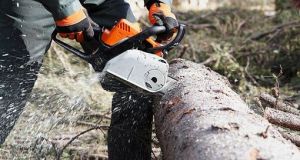 “Trees are removed only when necessary as a last resort. New trees are planted to replace those lost and to increase the overall number of trees in the county.” Photograph; Getty Images

More than 7,000 trees have been cut down by local authorities in the last 18 months, new figures show.

The majority of councils cited trip hazards, as well as tree diseases, storm damage and “health and safety” as the reasons for felling trees.

Figures provided to The Irish Times following a series of Freedom of Information requests show that around 7,125 trees have been cut down by councils around the State since January 2018.

South Dublin County Council felled the highest number of trees during that period with 1,531 being cut down.

Teresa Walsh, director of environment, water and climate change at the council, said the authority only removed trees in cases which met certain criteria. These included trees which were diseased or were causing structural damage to footpaths.

“Trees are removed only when necessary as a last resort. New trees are planted to replace those lost and to increase the overall number of trees in the county,” Ms Walsh said.

The council also planted more than 3,000 trees during the same period, she added.

In the Dún Laoghaire-Rathdown County Council area, 1,199 trees were cut down during that period. The council said it always explored other options before deciding that removing a tree was the best course of action.

“Trees are only removed if they are dead or diseased, or for public safety reasons. We attempt to approach removals on a case-by-case basis, but if a tree is healthy our first approach would be to retain it if at all possible,” a spokeswoman for the council said.

A number of councils, including Donegal, Tipperary, Kilkenny and Waterford, said they do not keep exact records of the number of trees they fell.

Three councils – Offaly, Roscommon and Sligo – did not provide information.Louth County Council requested fees of €460 to compile the data, which was not paid.

The issue of tree-felling has come under increased public scrutiny over the last few months following a number of high-profile removals.

In March, more than 100 mature trees were taken down along a path between Rathvinden and Milford in Co Carlow.

Fifteen mature broad-leafed trees, dating from the 1970s, were removed from an area beside Oakville shopping centre in Clonmel, Co Tipperary. In Waterford, 30 trees were felled in the city centre and in Dungarvan.

Joe McConville, Tree Council of Ireland president, said in some cases, particularly in urban areas, removing trees was necessary because an unsuitable species had been planted.

“Sometimes it is necessary because in the past people planted the wrong trees in the wrong places,” Mr McConville said. “The classic mistake that was made in the 1960s was planting cherry trees, and they were planted all over Dublin, and they just didn’t have the space to grow so they started popping footpaths. Over the last 20 years a lot of cherries have had to be taken out as a result.”

He said good education, good judgment and replanting were crucial when dealing with tree-felling.