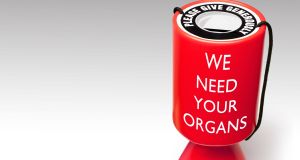 Under new legislation, a person will be deemed not to have agreed to be a donor if they had, while alive, registered their wish not to become one. Photograph: Peter Dazeley via Getty

A merged opt-in and opt-out register to consent to organ donations could sow doubts and lead to fewer donations, a Department of Health official has said, contradicting a donor advocacy group.

Under new legislation, a person will be deemed not to have agreed to have their organs donated on their death if they had, while alive, registered their wish not to become an organ donor.

Mr Murphy said the focus on an opt-out-only register was “a huge missed opportunity”. It was “misleading” to put an emphasis on a “soft opt-out with family consent” as it implied a change of practice, he argued.

Giving families an opportunity to be on an opt-in register would be “a useful call to action and decision aid for when their consult is sought”, ultimately increasing the number of organ donations, he said.

Mr Conroy said maintaining an opt-in and opt-out register created a problem because a large proportion of the population would not be on either register.

“It could sow a doubt and the opinion is that it could lead potentially to less donations,” he said.

Mr Murphy disagreed, saying: “It is essential to have the ‘no’ register as well as the ‘yes’ register because then you have captured the decision-makers.”

Ireland was in a very strong position to adopt a register given that 957,500 people had the new format driving licence where they have indicated their wish to be a donor, he said.

He said at the end of last month 577 people were on transplant waiting lists in Ireland, 499 of whom were on the kidney transplant list. The plan is to have the new legislation enacted into law by the end of next year.

Organ Donation Transplant Ireland, the HSE-run office, anticipates that 5 per cent of the population will opt out of organ donation under the proposed legislation. The Irish Donor Network told the committee that an opt-out system in other countries is one of several factors that leads to higher donation rates.

“It is building a system like a jigsaw so you have a comprehensive approach,” he said.

He pointed to the record in Spain, which is regarded as having the leading model with a soft opt-out system and an emphasis on making key donor co-ordinators available to support families through the donation process.

In separate testimony, the Irish Medical Organisation pointed to the crisis in the medical workforce, telling the committee that any reform of the health system was simply impossible unless understaffing was addressed.

“The simple fact is that notwithstanding the spin around high levels of health spending, the budget is insufficient to meet the needs of the population and it is time for politicians and policymakers to be honest about this,” he said.

He warned that 50 per cent of public health specialists were due to retire over the next five years, when almost 700 GPs will leave the system, while the country was training “doctors for export”.