Children and parents in shock after Coolock school destroyed by fire 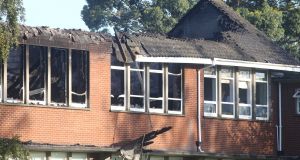 Aftermath of the fire at Scoil Chaitríona GNS, which is just off the Malahide Road in Coolock. Photograph: Gareth Chaney/Collins

On Wednesday morning, teachers, children and parents watched in shock as their primary school went up in flames.

Teachers hugged each other outside the school gates, while parents shed tears and held their children tightly as they looked out at the blackened shell of the building.

“Everyone is in total shock,” says deputy principal Fiona Gormley. “The school has always been at the centre of the community. It’s involved with everybody: grandparents, their children, their grandchildren . . . now, it’s gone.”

Fire ripped through the building at about 6am on Wednesday morning.

It took six fire engines to contain the blaze which caused major damage to the senior school. The roof collapsed, while classrooms on the first floor were gutted.

No one was injured, although a local resident was taken to hospital as a precaution due to smoke inhalation. A Garda investigation into the cause of the fire is under way.

Department of Education officials are working to find a temporary premises for 200 pupils attending the senior school, as well as about 240 pupils in the junior school which suffered less serious moke and water damage.

Officials are hopeful that temporary accommodation will be available from next Monday.

Niamh Geraghty, whose daughter Amelia (7) attends the senior school, was first alerted to the fire when she checked her phone on Wednesday morning.

“I woke up to see 38 messages from our parents’ group text,” she says. “The first message was at 6.40. There were pictures, video. It’s just devastating. My mam was crying. She’s 70. She was upset thinking of it all. It’s a lot of history just gone. The pictures, the photographs are gone. It’s not the building at all. It’s all memories and all the children’s work.”

Nicola Reid, whose twins Katie and Ella attend the school, rushed there as soon as she heard the news.

“It fell before our eyes, it was heartbreaking,” she says. “It’s like a home to us. We’re all so close. I pass 10 schools on the way but we come here because it’s a fantastic school. We’re best friends and see each other everyday. So we wanted to be here to lend support more than anything.”

Another parent, Lynsey Bell, lives in a cul-de-sac which overlooks the schools. The fire, she says, is jolting for generations.

Parents have been deeply involved in the school and their fundraising recently paid for a new library. They are also involved in maintaining the gardens and helping in class.

The community response, they say, has been hugely encouraging. On Wednesday morning the local youth club, St Paul’s, opened its door to provide tea and coffee for parents and arts and crafts for the children to play; local schools already have been offering rooms and support.

“Everyone is coming together,” says parent Nicola Reid. “You couldn’t fault anybody.”

Work on finding temporary accommodation, meanwhile, is under way. Cleaning of the junior school has started already, while an announcement is due to be made to parents on Thursday morning.

“Our children like routine and stability, so, we’d like to keep them together,” says deputy principal Fiona Gormley.

“ To have them on the site somewhere would be ideal. We had the Minister for Education here this morning, so he’s lending his support. We had local politicians like Finian McGrath, Aodhán Ó Riordáin, Seán Haughey. So, we’re have lots of local support . . . Right now, it’s just a matter of regrouping and getting back to normality as soon as possible.”