Dilution of Bill to teach Traveller history in schools criticised 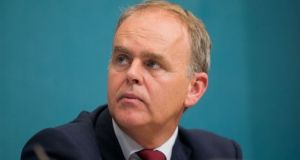 Minister for Education Joe McHugh pointed out that the school curriculum was determined through an extensive process conducted by the National Council for Curriculum and Assessment, which resulted in the production of syllabuses or specifications for each subject area. File image: Gareth Chaney/Collins

The Senator who championed legislation to ensure Traveller history and culture is taught as part of the school curriculum has expressed her regret at amendments that dilute its provisions.

Independent Colette Kelleher did not press a vote on the four changes introduced by Minister for Education Joe McHugh to her Traveller Culture and History in Education Bill which was passed by the Upper House and now goes to the Dáil.

“I’m disappointed,” Ms Kelleher said but she added that “I do feel we have the basis of further conversation and we can do more work and that this Bill can go to the Dáil”, and she called on the Minister to champion it there.

Mr McHugh stressed his commitment to ensuring the promotion of knowledge and understanding of Traveller culture and history in schools and equally ensuring that another young generation of Travellers was not marginalised.

Concerns have been raised that it could be seen as political interference to deliberately set the subject in the curriculum, although a number of Government policy documents state that culture should be taught in schools.

The Minister said elements of the Bill were legally problematic including a provision specifying that Traveller culture and history should be part of the curriculum. It would become the only subject area specifically prescribed to be taught, “granting it a different status from all other subjects, including Irish, English and maths”.

He pointed out that the school curriculum is determined through an extensive process conducted by the National Council for Curriculum and Assessment, which results in the production of syllabuses or specifications for each subject area.

He wanted to ensure the Bill reflected the intention to include Traveller history and culture within the education system while not specifically prescribing the curricular content by means of legislation”.

The Minister also said Traveller culture and history was relevant to a number of subjects including geography, history, arts and creativity.

Ms Kelleher said they were talking about 40,000 people, Ireland’s only recognised ethnic minority. She said that for Traveller children school can be a cold place where people are “ignorant of who you are, where you came from”, where a child might drop out “because you are bullied, your spirit and identity not acknowledged or cherished”.

She said 80 per cent of Travellers were unemployed in an economy of full employment with average life expectancy of 61 compared to 75 of the rest of the population and where Traveller men are seven times and women six times more likely to take their own lives than the general population.

Sinn Féin Senator Pádraig MacLochlainn said they had to ensure “we don’t have another generation brought up with a virus of what is racism towards a section of our own people”.

Mr MacLochlainn said “we have to start to right the wrongs and teach the true history of all our people in our schools” and suggested there could be “talks and days where you celebrate Traveller culture maybe once a year”.

Independent Senator Joan Freeman Joan Freeman warned that “we are never going to train the ingrained attitudes of our generation. The only way it can happen is through our children.”

She believed “we can only do this through legislation and changing the whole attitude of the people of Ireland”.

NUI Senator Alice Mary Higgins said every young Traveller child should not have to justify or explain their existence. “There needs to be a wider understanding.”