Demanding questions of millennials leading to a global food ‘revolution’ 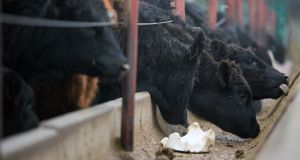 A desire among millennials to know the origin, breed and feed involved in producing the beef they eat was leading to growth ‘on the premium side’ of the meat market. File image: Kristina Barker/The New York Times.

Millennials are leading a global revolution by asking demanding questions about how food is produced and its impact on the environment, a conference on the future of Ireland’s agrifood sector has heard.

Mary Shelman, a former director of Harvard Business School’s agribusiness programme, said millennials place an emphasis on “fresh, local, authentic and healthy” foods. She said they exert enormous influence not just on production methods but also on attitudes among others such as their parents.

Speaking at a conference in Dublin on developing a 10-year strategy for the Irish agrifood sector to 2030, she said this cohort wanted to know the extent of the freedom afforded to chickens rather than simply if eggs were free range.

With a beef steak, she said, it not just the cut they want to know but the origin, breed and feed involved. This was leading to growth “on the premium side” which meant these would soon be commodity products, she said.

Ms Shelman said sustainability had switched “from fad to fundamental” in the perception of millennial consumers. She said this was an added complication for the agrifood industry as its definition was constantly changing.

“That is why biodiversity and regenerative farming is so important.”

She said the question had to be asked if these concerns were based on having a sustainable production system or merely a sustainable diet.

She said new technologies, including digitisation and gene editing, were bringing unprecedented change and facilitating increased productivity with reduced resources and less waste. It was also allowing farmers to take proactive decisions on their enterprises, which was “transforming agriculture from an art to a science”.

Ms Shelman, who co-authored the 2010 report Pathways for Growth report which led to the creation of the Origin Green quality assurance scheme, said food demand would increase over the next 30 years “in a world of constraints, particularly on the water side”.

She said there would be lower stocks, bumpy supplies and unusual weather events that would contribute to increased price volatility, while China would continue to be “the biggest influencer” with 22 per cent of world population and less than 10 per cent of its resources.

Ms Shelman predicted that protein production would undergo a radical change, driven by breeding more carbon-friendly cattle, increasing generation of plant-based proteins and the cultivation of meats made in the laboratory – without animals. She said it was predicted by 2040 that alternatives to traditional meats would make up 60 per cent of the meat market.

The implications for Ireland due to the changing face of agriculture included the reality that every agrifood enterprise had to have a data-driven tech business, including farms. Sustainability and innovation had to align in every element of the supply chain, she said.

A new range of big investors had higher expectations and were injecting pace into transforming the sector and how the Irish beef and dairy sectors engaged with this was of critical importance, she suggested.