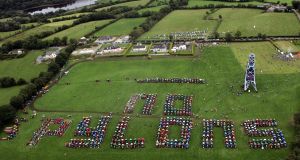 Long-time protest: Farmers from Monaghan, Cavan and Meath and over 1200 tractors in 2008 in a NEPP rally opposing the North South interconnector. Photograph: Matt Kavanagh

Opponents of a plan to route the proposed North South electricity interconnector along high-level pylons between counties Meath and Armagh have expressed disappointment at a new report which supports the project.

The report published on Tuesday by the Department of Communications, Climate Action and Environment supported the economic and technical case for using pylons, instead of the opponents’ preferred option of putting the cables underground.

The report was accompanied by a second report on international practice on compensation for landowners, which found Ireland has a comparatively generous compensation regime.

The Government considered both reports at its Tuesday Cabinet meeting but noted only that it “does not seek to direct national grid operator EirGrid, ESB Networks or other energy infrastructure developers to particular sites or technologies” .

Earlier this year the High Court dismissed a second legal challenge to the planned 138km electricity interconnector. The project comprises a 400kv overhead line linking an existing substation in Woodland, Co Meath, with a planned substation in Turleenan, Co Tyrone.

In January, the Northern Ireland department for infrastructure announced it was granting planning permission for the northern section.

The project is planned to provide a second high-capacity all-Ireland interconnector alongside the existing 275kv overhead line between Co Louth and Co Armagh.

Meath Fine Gael councillor Gerry O’Connor, a long-time opponent of the project, said it was “very disappointing” that Meath “the heritage capital of Ireland” would be blighted with 44m-high pylons.

Mr O’Connor said it was doubly disappointing as a previous interconnector from Britain under the Irish Sea had been placed underground from Rush, Co Dublin where it came ashore, to Batterstown in Co Meath.

Attempts to contact the North East Pylon Pressure (NEPP) campaign on Wednesday were not successful. However the presentative group for those who advocate that high power electric cables should go underground has in the past taken issue with Eirgrid’s scientific advice on the technical reliability of underground cabling.

Friends of the Irish Environment said the wearying aspect of the debate was the length of time between proposals and decisions. The organisation’s director, Tony Lowes, noted that farming and heritage organisations, as well as the Meath county board of the GAA had “joined a chorus of opinion pitted against the State company, EirGrid”.

However business lobby group Ibec welcomed the report as having been “prepared by an independent international expert commission” and “confirming Ibec’s long-held view that an overhead line is the most beneficial and cost-effective solution for Irish consumers and businesses”.

Ibec senior energy executive Conor Minogue said: “The North South interconnector is one of the most critical pieces of infrastructure needed for Ireland in the next few years.”

1 Coronavirus: What will reopen in Ireland’s phases to ease restrictions?
2 Coronavirus: No new Covid-19 deaths reported in State for first time since March
3 Next government could bring in work-from-home tax incentives – Taoiseach
4 Swimming ban at Dublin's Merrion strand due to poor water quality
5 Unconvincing account may take some heat out of Dominic Cummings controversy
Real news has value SUBSCRIBE