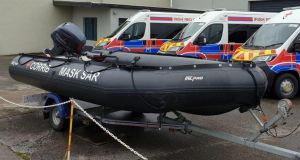 The boat with its engine which was stolen. Photograph: Ray Ryan

One of the largest lakes in Ireland has been left without a search and rescue service after the engine and navigation gear on the volunteer unit’s boat was stolen.

Thieves removed the equipment on the vessel operated by the Corrib Mask Search and Rescue team “with surgical precision” at some point between midday last Thursday and Saturday morning.

“We are just shattered by this” the commander of the 26-strong volunteer crew Niall O’Meara told The Irish Times. “The boat is not even two years old and the engine is virtually new.”

He said the engine had been “surgically removed from the back of the boat” by people who knew exactly what they were doing. “This was not amateur hour. Normally in a theft like this thieves use a chainsaw to hack at the cables but this was very carefully removed and it would have taken at least two fully grown men to carry it to a van.”

He pointed out that the search and rescue crew was a critical resource relied upon by the Irish Coastguard for operations in Lough Corrib and Lough Mask and was called onto the water frequently.

A emergency call to the service was made as recently as last Saturday afternoon when a local fisherman’s engine failed leaving him stranded in Lough Corrib. As the rescue boat was out of commission one of the volunteers had to use their own vessel to reach the stranded boatman.

“We don’t shout about what we do because a lot of the time we are dealing with tragedies, particularly when it comes to the recovery of bodies and there are sensitivities around that. But we are all volunteers and are on call 24/7 and so much effort went in to raising the funds for this boat,” he said.

He stressed that it was essential for the boat to be readily accessible and pointed out that “it is the same as a defibrillator or life buoy and needs to be visible, we simply can’t waste 15 or 20 minutes bringing it to the water when lives are at stake.”

Mr O’Meara said that in the absence of a secure boathouse, there was a danger any new equipment would be at grave risk of being stolen. “Even if we were able to magic up a boat now we can’t return it to the water because these guys have had a nibble and will be just waiting to come back. We have no secure place to put it and that is the issue.”

The boat was moored on the water’s edge by the Ashford Castle estate and the hotel’s general manger Niall Rochford said it was “an essential service which saves lives and he likened the theft to “stealing wheels from an ambulance”.

Mr O’Meara said an old pump house by the lake in Cong, which currently stores disused plant equipment owned by Irish Water, had been earmarked as a secure boathouse for the rescue unit but expressed frustration that Mayo County Council had yet to take steps to hand it over to the team.

A Mayo County Council spokeswoman said it had been working with the Corrib Mask Navigation Trust in an effort to find the Search and Rescue group a permanent and secure home.

She said that in the wake of the engine theft the council had been asked to facilitate the housing of the search and rescue boat/engine in the pumphouse at Lisloughrea pier. “We would be happy to facilitate this request but at this time we are currently ascertaining some clarification around ownership of the pumphouse and hope this information will be clear in the coming days.”