Health officials appeal to teenagers and those in twenties, thirties reduce social contacts 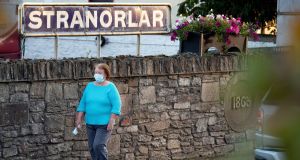 A woman walks past a sign in Stranorlar, Co Donegal. Photograph: Joe Dunne

The acting chief medical officer Dr Ronan Glynn and his Northern Ireland counterpart Dr Michael McBride have appealed for people to avoid unnecessary travel across the Border in Co Donegal and in neighbouring areas in the North.

“Given the current number of new cases in Donegal and neighbouring areas of NI in Derry, Strabane and Fermanagh we would appeal to everyone to avoid all but necessary travel across the border,” the pair said in a statement on Friday.

Co Donegal is set to move to Level 3 of the Government’s five-level Covid-19 restrictions scale from midnight on Friday.

Employers on both sides of the Border have been asked to make every effort to enable staff to work from home.

The statement followed a meeting between the men where they discussed the growth of virus in the region and stressed the need for ongoing co-operation between the North and Republic.

The statement also acknowledged the need for close collaboration in other Border areas, not just Donegal and Derry, where the situation continues to develop.

They noted particular concern regarding the growth of cases among young people in Donegal and Derry and asked teenagers, as well as those in their twenties and thirties, to reduce their social contacts.

The chief medical officers appealled to the public across the island of Ireland to follow public health advice in a bid to curb the spread of Covid-19.

The Government moved swiftly on Thursday to elevate Donegal to Level 3 of the five-level scale after a dramatic and rapid escalation of cases of the virus in the county.

The number of cases per 100,000 over the past fortnight in the county increased to 148.2, and is now the highest in the country.

Nearby Derry and Strabane across the Border has one of the highest rates of infection in the North.

Public health expert Dr Gabriel Scally said it was “beyond sensible but essential” to have “seamless” Covid-19 measures in Donegal and Derry and to avoid travel between the two counties.

“If it looks like there is an unevenness of measures between the two places, particularly in terms of retail or hospitality industries, that would be extremely detrimental,” said Dr Scally.

The “distinctive situation” in the Border region with the movement of people between Donegal and Derry “reinforces the need for harmonisation for measures” north and south, he said.

Taoiseach Micheál Martin has spoken with the North’s First Minister Arlene Foster and Deputy First Minister Michelle O’Neill about the need for a “pragmatic and practical” policy designed to reduce travel north and south except for work, education or essential reasons.

People across the Border from Co Donegal were urged on Thursday to use their “civil and moral conscience” if considering visiting the county.

Insp David Durkin, who is in charge of the emergency planning for the local force, said gardaí could not stop people from coming into the county from neighbouring Derry and Tyrone.

He did not see a situation whereby gardaí would set up checkpoints along the Border, such as happened during the start of the national lockdown in March.

One of the most challenging aspects of the lockdown in Donegal will be daily interactions, with thousands of people working and going to school between both areas.

Meanwhile, Lifford, Co Donegal GP Dr Martin Coyne has said the proximity of Derry to Donegal has contributed to the rising level of cases.

The Border does not exist for people going to and from work, to shop, socialise or go to school on either side of the Border he told Newstalk Breakfast.

It was not one way traffic and people from Donegal could have brought the virus to Derry, he said.

His practice saw 17 cases between March and September 17th, in the most recent two weeks he had seen 54 patients, he said.

It appeared social gatherings such as birthday parties, Leaving Cert result parties, communions, and, unfortunately a wake, were responsible for this surge.

“People have been gathering together and probably not respecting social distancing advice. Unfortunately, it has got into our community now and it is spreading.”

Dr Coyne urged people to “keep their guard up” and to remember, “how horrible a condition this is.” He warned that even if patients did not end up in hospital, some would be “miserably unwell” while others would be severely restricted.