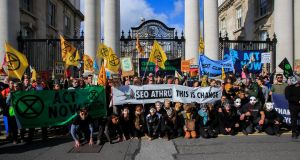 Plans to open the Oireachtas to the public this weekend have been scrapped due to fears that the Extinction Rebellion movement demonstrations on Merrion Street could disrupt the event. Photograph: Gareth Chaney/Collins.

Plans to open the Oireachtas to the public this weekend have been scrapped due to fears that the Extinction Rebellion movement demonstrations on Merrion Street could disrupt the event.

The doors of Leinster House were to be opened to the public between 11am and 5pm on Saturday and Sunday as part of an Open House event taking place at venues around Dublin. However, with a large group of protesters camped nearby, the gates will now remain firmly shut.

Extinction Rebellion, who describe themselves as a non-violent, climate change protest group, have been holding a number of protests throughout Dublin this week and in major cities across the world.

Gardaí arrested four men and a woman on Thursday night after they chained themselves to the railings outside Dáil Éireann as part of the campaign.

The five were arrested for public order offences and taken to Pearse Street Garda station before being released without charge.

Ceann Comhairle Seán Ó Fearghaíl said those behind the plan to welcome the public into the Oireachtas were “bitterly disappointed to have to take this course of action”.

However, he said that following Thursday night’s incidents “we cannot take any further health and safety risks for the hundreds of guests who wished to attend and equally we cannot place our staff at risk”.

He said the Open House event there would be rescheduled as soon as possible.

The environmental activists on Friday wallpapered the front of the Department of Communications, Climate Action and Environment with pages written by climate scientist Prof Robert Howarth of Cornell University detailing the impact of fracked gas.

Prof Howarth told an Oireachtas committee on Wednesday that the methane content of fracked gas made it 100 times more powerful than carbon dioxide in terms of greenhouse gas emissions. “I urge Ireland to prohibit the importation of fracked shale gas from the United States, ” he said.