‘We had a tiger by the tail’: The forgotten loyalists of the peace process 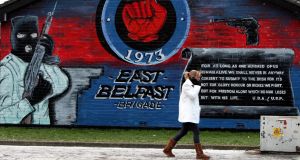 A loyalist mural on the Newtownards Road in Belfast, as leaders of the UDA confirmed it had decommissioned all weapons under its control

Twenty-five years on, Gary McMichael, who led the Ulster Democratic Party when loyalist paramilitaries declared a ceasefire, believes that a generation of loyalist leaders have not received their due.

Back then, aged just 25, McMichael, in his role as leader of the UDP, was the political voice of the Ulster Defence Association (UDA), frequently featuring on television screens, or seen entering or leaving meetings.

They posed for a picture afterwards, with big smiles on their faces. Looking back, the evident satisfaction shown by the group seemed to offer real hope that the conflict was over after 25 years.

Today, Spence, Ervine, Smyth and McDonald are dead. McMichael and Adams pulled out of politics entirely by the mid-2000s, while John White is effectively in exile after he sided with Johnny “Mad Dog” Adair in one of the many subsequent bloody loyalist feuds afterwards.

McMichael lives more quietly now, running an addiction charity in Lisburn. He seldom gives interviews but here he reflects on the role played by the PUP and the UDP.

Recalling the 25th anniversary of the loyalist ceasefire, which falls on Sunday, McMichael remembers, too, the breakdown of the first IRA ceasefire 16 months later, in February 1996, when bombs exploded in Canary Wharf.

If he and the likes of Adams, Ervine, Billy Hutchinson and other loyalists had not been able to contain that beast, Northern Ireland could have been thrust right back into another cycle of violence.

McMichael’s feeling that this achievement is underappreciated is echoed by Hutchinson, a Progressive Unionist Party (PUP) councillor and former UVF member who points out that loyalists stayed disciplined after Omagh in 1998.

“I think we had moderate voices that helped, but we had a tiger by the tail; we did not know how it was going to go,” adds McMichael, whose father, the UDA leader John McMichael, was murdered by the IRA in 1987.

In October 1994 people such as McMichael hoped that working-class loyalists would develop their own political voice, rather than being exploited the Democratic Unionist Party, the Ulster Unionists or extreme elements.

Instead it was hoped that the PUP, linked to the UVF and Red Hand Commando, and the Ulster Democratic Party, reflecting the views of the UDA, would mark political gains.

For a time it looked like that would happen. David Ervine and Billy Hutchinson were elected to the Stormont Assembly, but political loyalism never achieved roots that were sufficiently deep to build long-term support.

Unlike the PUP and the UDP, Sinn Féin made gains after 1994, though McMichael says it should be remembered that just a tiny majority of unionists supported the Belfast Agreement.

“Within nationalism everybody was pointing in the same direction,” he says. “The dynamic within unionism was different; within unionism it was hearing [that] this was a sell-out from Paisley; it was a difficult position to be in.

“I don’t think anybody in the UDP or PUP felt that somehow this would be massive political success; that was not why we were doing it – we were in it in order to end the conflict,” he says.

“We brought a voice and made a contribution to the resolution of the conflict, but when we got to election mode, people voted as they always did [by voting for the main unionist political parties, and increasingly the DUP],” he says.

Moreover, and again this is often forgotten, McMichael and Hutchinson feel the PUP and the UDP provided cover for David Trimble when he led the Ulster Unionists into Castle Buildings in Stormont in September 1997.

That began talks that led to the Belfast Agreement on Good Friday the following April. The DUP was firmly opposed, but the UDP and PUP demonstrated that Trimble was not alone within wider unionism.

Today loyalism has fallen back. Each weekend, the Belfast edition of the Sunday World and the Sunday Life introduce a rogues’ gallery of loyalist godfathers who still hold sway in working-class loyalist areas.

The stories are of vicious internal squabbles, racketeering, drug dealing, intimidation, extortion in places such as the Shankill, east Belfast, south Antrim. People who do not make weekly payments face the risk of having their businesses torched.

In the early 2000s loyalism became embroiled in a vicious internal feud. Several people were killed. So bad did it become that Gusty Spence was forced to leave his Shankill home by Johnny Adair’s Lower Shankill UDA “C” Company.

It was then that McMichael’s political disillusionment set it. “The party was seen as the face of that part of loyalism, but actually we had no control or influence. We were taking all the heat but could not do anything about it.” He quit politics in 2005.

Back in 1994 Billy Hutchinson was in Fernhill House on the day of the ceasefire announcement but kept out of the photograph.

“It was very emotional; I was sitting in the back feeling our world had changed, our lives had changed.

“I felt it was a great day, something we had all been waiting for. I felt: it’s over,” says Hutchinson, now 64 and a PUP councillor on Belfast City Council. He served time for the murder of two Catholics in west Belfast in the 1970s.

He acknowledges that criminality is tainting loyalist areas, but argues those involved are not loyalists. Republican paramilitaries must have made “at least a billion pounds from the Troubles” – much of that, he says, now turned into “legitimate” business.

“There is no place for criminals. I was a member of the UVF and I certainly don’t want it to go down in history as a criminal gang, because I belonged to an organisation that was trying to prevent a united Ireland.”

He was “angry” on the day when he sat and watched Ian Paisley and Martin McGuinness sharing power as first minister and deputy first minister at Stormont in May 2007: “But after 30 seconds I calmed down and realised that is what we wanted.

“We contributed to that. It was hard-won. Loyalists need to take a lot of pride in what they did. Paisley and McGuinness got there because of work loyalists did,” says Hutchinson, one of three PUP councillors now holding seats across Northern Ireland.

It is a sentiment Gary McMichael endorses: “While there is so much negativity about now, this is 1,000 per cent better than it was 30 years ago. We have to keep things in perspective.”