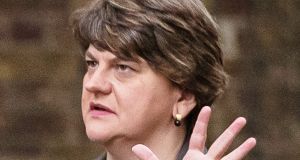 The DUP remains opposed to a UK or Northern Ireland only Brexit backstop and anything that ‘traps’ Northern Ireland in the EU single market or customs union, Arlene Foster has said. Photograph: Aaron Chown/PA Wire.

With talks between the UK and the EU set to “intensify” in the coming days, Arlene Foster said on Friday that her party “will always exercise our considerable influence in ensuring we stand up for Northern Ireland”.

“We will only ever consider supporting arrangements that are in Northern Ireland’s long-term economic and constitutional interests,” she said.

Taoiseach Leo Varadkar and British prime minister Boris Johnson met on Thursday and it has been reported since that some form of customs border in Irish Sea is likely to be explored as an alternative to the backstop, an insurance policy included in the withdrawal agreement reached by Theresa May and the EU which aims to avoid the need for border checks on the island of Ireland.

Ms Foster said her party was in regular contact with Mr Johnson, who is “aware of our views”. She said the leave vote in the EU membership referendum in 2016 was the “people’s verdict and it must be delivered”.

“To do otherwise would be anti-democratic,” she added in a statement.

Ms Foster reiterated the DUP’s opposition to any backstop “...whether UK or NI only, and anything that traps Northern Ireland in the European Union, whether Single Market or Customs Union, as the rest of the United Kingdom leaves will not have our support”.

She said Mr Johnson is “very mindful of that”.

Ms Foster expressed the DUP’s desire for “a balanced and sensible” Brexit deal which had the support of unionists and nationalists.

“The DUP has always indicated that the United Kingdom must leave the EU as one nation and in so doing that no barriers to trade are erected within the UK.”

She said the EU must accept “the economic and constitutional integrity of the whole of the United Kingdom will have to be respected as we leave”.

“As a consequence of the mandate given to us by voters in 2017, the DUP is very relevant in the parliamentary arithmetic and regardless of the ups and downs of the Brexit discussions that has not changed,” she said. “We will judge any outcome reached by the Prime Minister against the criteria above.”

Former Ulster Unionist Party MEP Jim Nicholson said he was “concerned Northern Ireland is being offered up as a sacrificial lamb in Brexit negotiations”.

“I have watched with increasing concern at how events have unfolded in the last few months,” he said. “I fear that Northern Ireland is being offered up by Boris Johnson as the sacrificial lamb to save Brexit for the rest of the UK, the ERG and especially English nationalists.”

Mr Nicholson was critical of the DUP, saying the party had “completely wasted” its influence at Westminster.

“If Northern Ireland is left sitting on the window ledge of the union, on their head be it,” he added.

1 Nine tenants evicted from north Dublin property by men in masks and dark clothing
2 92 new cases of Covid-19 confirmed in Ireland with no new deaths
3 Young women found clinging to lobster pot after spending night missing in Galway bay
4 Aaron Brady, the man who said with pride he was a cop killer
5 €2.1 million recovered after sophisticated fraud against Dublin firm foiled
Real news has value SUBSCRIBE