Protestors are calling for the new National Maternity Hospital to remain free of any overriding religious ethos. Video: Ronan McGreevy 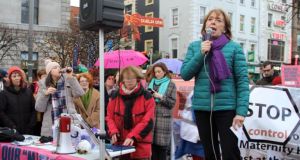 Social Democrats co-leader Róisín Shortall said it was clear the nuns had not got the requisite permissions from the archdiocese or the Vatican to divest themselves of ownership of the lands. Photograph: Ronan McGreevy

The co-leader of the Social Democrats Róisín Shortall has claimed that the nuns “haven’t gone away” from the new maternity hospital.

Speaking at a rally in O’Connell Street, Dublin on Saturday, in support the new maternity hospital being wholly in public ownership, Ms Shortall said it was clear the nuns had not got the requisite permissions from the archdiocese or the Vatican to divest themselves of ownership of the lands.

“It is still St Vincent’s Healthcare Group owned by the Sisters of Charity and that is the entity that Simon Harris is currently negotiating with.

“They are still there you know. They haven’t gone away. Let’s not be fooled by what we see in the media about this. The Sisters of Charity are still involved in the St Vincent’s Healthcare Group. There is no change in that.”

In 2017 the Sisters of Charity issued a statement stating that they will “end our involvement in St Vincent’s Healthcare Group and will not be involved in the ownership or management of the new National Maternity Hospital”.

Ms Shortall was responding to an interview given by the outgoing master of the National Maternity Hospital Dr Rhona Mahony, who said on Saturday that the Religious Sisters of Charity will have no involvement “whatsoever” in the new facility.

Dr Mahony, who finishes her term in Holles Street on January 1st, said it was unfortunate that a lot of people thought nuns were going to be running the new facility.

“So let’s just be very clear. The Sisters of Charity will not be running this hospital. They never sought to run this hospital,” she said.

“Telling women stories that this hospital will be run by religious sisters is really damaging. It frightens women because they may believe that services for them will be restricted in terms of not providing termination of pregnancy, not providing contraception, when in fact the opposite is the case.”

Dr Mahony said the Sisters of Charity, who own the St Vincent’s campus, have given the land for the new maternity hospital free of charge and are getting out of Irish healthcare.

She stressed there will be no religious interference “whatsoever” and that canon law will be “irrelevant” to the ethos of the hospital.

Following the interview the editor of The Irish Catholic Michael Kelly tweeted into the Marian programme contradicting her claim.

“Rhona Mahony is quite wrong to say Canon Law has no role in maternity hospital discussion. The nuns cannot alienate the property without Church approval.”

At the rally on Saturday, Ms Shortall referenced a report on the front page of The Irish Catholic this week which stated that the Archdiocese of Dublin had not received notification that the nuns intended to divest themselves of the land.

The report pointed out that under canon law the disposal of all church property over the value of €348,460 needs the permission of the local bishop, in this case the Archbishop of Dublin Diarmuid Martin, and also the Vatican where the value of the asset is worth more than €3,484,595.

Ms Shortall is a former junior minister at health.

The €300 million facility will replace the existing National Maternity Hospital and will be co-located with St Vincent’s Hospital on the grounds of St Vincent’s.