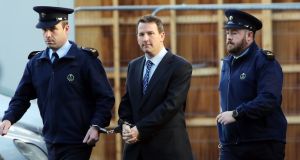 The prosecution argued Graham Dwyer had stabbed the 36-year-old to death for his own sexual gratification. File photograph: Collins Courts

Dwyer an architect from Kerrymount Close, Foxrock was found guilty of murdering Ms O’Hara at Killakee Mountain on August 22nd, 2012. He had pleaded not guilty.

Ms O’Hara’s remains were found in forestry on Killakee Mountain, Rathfarnham, Dublin on September 13th, 2013. She had been reported missing 13 months earlier.

The prosecution argued Dwyer had stabbed the 36-year-old to death for his own sexual gratification.

On the opening day of the trial, prosecuting counsel Sean Guerin outlined how Ms O’Hara’s killing was “very nearly the perfect murder”.

He told the court that against the odds, a pet dog had found Ms O’Hara’s skeletal remains deep in a forest on Kilakee Mountain.

A very dry summer meant water levels at the Vartry Reservoir were particularly low and the paraphernalia of Ms O’Hara and Dwyer’s sex life had been spotted by passersby and recovered by gardaí, along with mobile phones, Ms O’Hara’s keys and glasses.

There was no medical evidence on the cause of her death, there was no eyewitness who saw Dwyer at the scene and there was no forensic evidence to put him there.

But a series of text messages between the two, along with disturbing documents written by Dwyer and video evidence he had filmed, would combine to persuade the jury beyond all reasonable doubt that Dwyer had murdered Ms O’Hara.

The case centred on more than 2,600 text messages sent to Ms O’Hara’s phone, from an 083 phone bought by Dwyer under an assumed name and from two Nokia phones, the “master” and “slave” phones, recovered from the Vartry reservoir and also bought by Dwyer.

At the beginning of March, crime and policing analyst Sarah Skedd agreed the 083 phone number used by Dwyer usually used the same phone mast cells as his work phone on days it was operating.

Ms Skedd said Dwyer’s work phone connected to a cell site at the ESB headquarters at 4.55pm on the day Ms O’Hara disappeared and did not connect with the network again until a minute before 9pm.

She told the court the “master phone” was connected with a phone cell in Shankill at 6pm and it sent a message to the “slave phone”. The text said “go down to shore and wait”.

Mr Guerin said the Nokia master and slave phones were bought on November 30th, 2011 and, after that, the contact between the iPhone and the 083 phone “largely ceased” for a time.

Ms Skedd agreed with Mr Guerin that on various occasions, such as when Dwyer was on holiday, the 083 phone and his work phone used masts in the same area.

Mr Justice Tony Hunt told the jury before their deliberations it was for them to be satisfied “beyond reasonable doubt” that the 083 and the master phone were attributable to Dwyer.

When the guilty verdict came on March 27th, 2015 Mr Justice Hunt told the jurors while the verdict was not his business, it might be some consolation for them to know he “110 per cent” agreed with them.