Keith Cargill was to be collected at 4pm but the ambulance did not arrive until 6.30pm 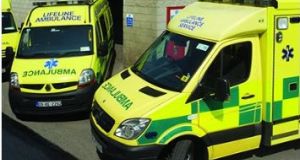 Lifeline said the patient was scheduled for a 30-minute appointment but stayed longer and ambulance crew ran out of safe hours.

A 75 -year-old man was left waiting over two hours after surgery for an ambulance that had to travel from Dublin to Cork.

Keith Cargill from Ennistymon, Co Clare was in a car accident at the end of October and has been receiving treatment in the intensive care unit in Limerick Hospital for the past three weeks.

He had an operation in the plastic surgery unit in Cork Hospital on Thursday afternoon and was scheduled to be transferred from the hospital and back to Limerick following the operation.

The ambulance was provided by Lifeline Ambulance Service, the largest private ambulance service in the country, owned by David Hall.

“They were supposed to take me to the plastic surgery unit in Co Cork from the hospital here in Limerick and then take me back. As soon I was out of surgery I was supposed to be collected and brought back,” said Mr Cargill.

“There was no sign of them for a good while and then I was told they had gone on another job. If they are supposed to be assigned to one job they should not be disappearing on other ones,” he said.

Mr Cargill said when inquiries were made as to where the next ambulance was he was told it was not available.

“I was then told they would be sending an ambulance down from Dublin to Cork. I thought it was absolutely ludicrous,” he said.

“I suppose they must have thought, he’s an old pensioner – he can stay where he is. We don’t need to worry about him. I’m not really concerned about myself though; I’m worried these delays are happening to other people. There must be hundreds of people up and down the country who are left in this situation. It stinks to high heaven,” he said.

“They were supposed to bring me from A to B and back again. They shouldn’t go off and disappear in the meantime,” he said.

Mr Cargill said he was meant to be picked up by the ambulance directly after his surgery at 4pm but the replacement ambulance did not turn up until 6.30pm.

“That may not seem like a long time, but I’m in intensive care. My legs and arms are very feeble. I’m not in a good state at the moment,” he said.

Mr Cargill said vulnerable and elderly patients are put at risk being left to wait around in hospitals if there are delays with ambulance transfers.

“It shouldn’t have happened. It’s not boxes they are transporting, it’s sick vulnerable people who shouldn’t be left waiting around,” he said.

He has no complaints about the ambulance drivers or hospital staff, he said.

“Whoever is managing the Lifeline ambulance system has questions to answer because it’s not fair to leave vulnerable patients waiting,” he said.

“He ended up an extended stay (6.5 hours) at the hospital and crew ran out of safe hours. A new crew was needed to return the patient,” he said.

“The ambulance was leaving Dublin to return to Limerick where it is based having dropped a patient off and was diverted to Cork.”

He added that “the charge for the journey was fixed, irrespective of where the ambulance comes from”.