There is ‘increased vulnerability’ in the housing sector, says agency chairwoman 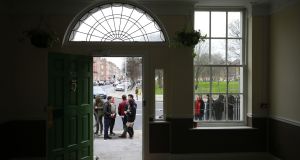 Housing charity Threshold has seen a dramatic rise in the number of calls it received from tenants in danger of losing their home because their landlords claimed they were going to sell the property.

The charity’s annual report, which will be published Wednesday, says that 32 per cent of calls in 2017 were from renters who had been told their their tenancies were coming to an end, that figure was up 18 per cent from 2016.

The agency’s chairperson Aideen Hayden told RTÉ’s Morning Ireland: “We received 73,526 calls from the public last year. There is an increased vulnerability in this sector.”

Threshold has assisted 209 tenants in determining that they have received a valid notice of termination by bringing their cases to the Rental Tenancy Board. Ms Hayden gave the example of one case where a landlord issued such a notice, but for the tenants to subsequently see the property on the rental market again.

“It is being used as an excuse.”

Ms Hayden called on the Government to immediately address two issues – unaffordable rent increases and the sale of rental properties. She said that unless there is an open, transparent rent register then the current rent protection legislation in rent pressure zones cannot work.

She pointed out that despite a cap of four per cent, rents in Dublin increased by more than 10 per cent last year.

Ms Hayden also said that in other countries tenants do not have to leave when a property is being sold. “People are being evicted into homelessness. In other jurisdictions the sale of a property is not a valid reason for ending tenancy.

“Where a property is being sold on into the rental market, we’re asking that there be no end to the tenancy.”

Properties are being left vacant for months, and in some cases, years, she said.

“We would welcome any improvement in the current situation.

“If the Minister wants to stem the tide, he needs to address unaffordable rent increases and the sale of rental properties.”

Ms Hayden said that in 40 years Threshold has assisted half a million people and while there have been some improvements, the agency has “never seen a crisis like this”. This is a very vulnerable sector, she said, with one in five people in the country in rented accommodation, one in three in Dublin and one in three in Galway.

“The Government cannot ignore the fact that people are facing homelessness in the private rental sector.”