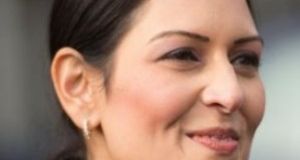 Conservative MP Priti Patel has said her comments about Britain preventing food imports to Ireland in the event of a no-deal Brexit have been “taken out of context”.

The former British international development minister has been condemned on both sides of the Irish Sea for her remarks in the Times that Britain could prevent the use of its country as a landbridge between Ireland and the continent.

She responded to a British government report stating that a no-deal Brexit might mean food shortages in Ireland.

In such a scenario she suggested this possibility could be used to exert pressure on the Irish Government to drop its insistence on the backstop.

“This paper appears to show the government were well aware Ireland will face significant issues in a no-deal scenario. Why hasn’t this point been pressed home during negotiations,” she told the Times in reference to the report.

Ms Patel’s only comments since that report was a tweet where she declined to elaborate other than to state: “It is clear my comments on‘No Deal’ (sic) have been taken out of context by some. We should go back to Brussels & get a better deal. There is still time. Let’s take back control of borders, laws & money.”

Many responses to her comments have referenced the Great Famine between 1845 and 1849.

BBC journalist John Simpson tweeted: “If Priti Patel really did suggest that Britain should use the threat of food shortages to force Ireland to change its approach to Brexit, which I find hard to believe, then I’m more shocked than I can say. Have we learned nothing since the 1840s?”

Labour MP David Lammy also referenced the Famine: “The starvation of innocent Irish men, women and children was one of the most shameful episodes in British colonial history. Priti Patel’s comments expose either extreme callousness or ignorance. Shame on her either way for throwing salt at old wounds.”

Owen Smith, a former candidate for the leadership of the Labour Party, described her comments as inexcusable.

“Ireland is our ally, friend and neighbour. To level this threat is as ignorant as it is reckless. I hope she reflects and retracts as soon as is possible. Her party leader should insist that she does.”

Former BBC journalist Gavin Esler tweeted: “Truly despicable comments from Priti Patel – how is it possible that someone like this ended up in the British Cabinet?”

Former SDLP leader Mark Durcan tweeted: “No, Priti, they weren’t taken out of context. What thought did you give to their content or context? Insulting people’s intelligence won’t redress or spin insults to identity & interests. But thanks for exhibit proof of the need for backstop & dangers with any parliamentary lock!”

Taoiseach Leo Varadkar, Ireland’s EU agriculture commissioner Phil Hogan and Sinn Féin leader Mary Lou McDonald have been among those in Ireland who have criticised the former Tory minister’s remarks.