Coronavirus: Aer Lingus pilots describe ‘privilege’ of flying to China to get PPE 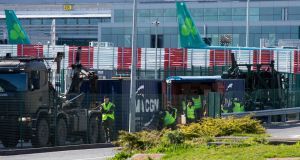 For Captain Pat O’Driscoll, one of the Aer Lingus pilots who flew to Beijing to procure personal protection equipment (PPE) for frontline healthcare workers in the past week, the motivation came from having two sisters who work as nurses, a daughter who works in child protection and a mother-in-law who is in a nursing home.

“These were all things that were important to me,” he said.

Mr O’Driscoll was on annual leave when he was asked to fly to Beijing for PPE. “I’d just come back from Seattle about three weeks previously – Ireland had changed. It was different. We were all mindful of colleagues and friends in other airlines working in precarious contracts who’d lost their jobs, and there was this opportunity available to us to go and do something,” he said.

“But the most significant thing that happened was after I came back from Seattle; I was out for a walk and I met a friend of mine who’s very senior in Dublin Fire Brigade. I asked him how things were going. He said it was tough and he’d spent the past 30 hours trying to procure PPE. We did 28 hours. That man did 30 hours. That was important for me in getting this job done,” he told the Late Late Show on Friday night.

Mr O’Driscoll has been flying with Aer Lingus since 1979 and said he’d “been through a few of the crises” including 9/11. “But this is the biggest step up the Aer Lingus team has ever had to do,” he said. Mr O’Driscoll added that he was “honoured to be asked”.

Captain Brian O’Sullivan, the Aer Lingus pilot who captained the first flight to Beijing last week, has been with Aer Lingus for over 31 years. “This is the first time anything like this has ever happened. We’ve never, over such a short period, been able to start a new route and operation like this,” he told Ms O’Callaghan. He said he has been “taken aback” by the support the flights are receiving.

John Kelly, Director of Operations at Aer Lingus said the planning for the flights drew “complexities” as the airline had only ten days to liaise with the Department of Foreign Affairs, the Department of Tourism, Transport and Sport, and with the Embassy of China for the processing of visas.

In normal circumstances, he explained, when a new route is launched, the Aer Lingus commercial team provides pilots with six months notice to put together route analysis and route structures.

Another complexity is making sure that no staff have to quarantine upon their return. “Part and parcel of the approval we got for this particular mission was that everybody would stay on board. We have a requirement for a couple of people to do an inspection on the plane but once we stay within the footprint of the aircraft, that’s fine,” Mr Kelly explained.

“The buy-in was really easy for everybody. Everyone understood the importance to join together, the importance to put in the long hours and to get it right. It was a very willing group of people,” Mr Kelly told the Late Late Show host.

Captain Tina Murray has been flying with Aer Lingus for 30 years. She described the Wednesday flight to Beijing as “a privilege” and “different to anything we’ve ever experienced.”

“We all felt powerless and helpless and suddenly to be able to do something to support the country was amazing. I felt humbled to do it and very aware that this is something special, to be given this opportunity to support the fabulous healthcare staff,” she said on the show. Captain Murray will be flying out again on Sunday and next Friday.

On Saturday, the 14th flight was due to arrive back from the 18,000km Dublin to Beijing roundtrip, carrying up to 18 tonnes of cargo.

At least one type of respiratory mask and one type of face goggles was considered not to be usable by the HSE after it inspected the first consignment. Sources said the HSE hoped to eliminate these problems in future shipments.

Covid-19: Restaurant industry left ‘in a vacuum of the unknown’- RAI