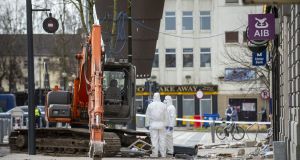 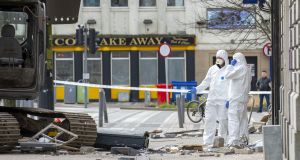 A digger was used in the robbery. Photograph: Ciara Wilkinson

A criminal gang based in South Armagh, including a suspect for very serious crimes in the Republic, was behind a daring effort to steal two ATMs from banks in Dundalk, Co Louth, early on Saturday, gardaí believe.

The gang moved south into the Republic in a convoy that included a heavy goods vehicle with a trailer carrying a mechanical digger as well as an SUV and at least two other cars.

As the men in the convoy moved in on the ATMs on Clanbrassil St in the town their accomplices blocked the vehicle entrance to Dundalk Garda station, a short distance from the ATMs, with two vehicles and set them on fire.

This meant no patrol cars could leave Dundalk Garda station to respond to the robbery while it was underway, The gang succeeded in using the stolen mechanical digger to rip the two ATMs from the wall of a branch of Ulster Bank and a branch of AIB at about 3.15am.

However, the large convoy had been spotted by gardaí moving through the town and a major operation swung into action involving gardaí from Dundalk station, the Armed Support Unit based in the north east and a Dublin-based helicopter from the Garda Air Support Unit.

The raiders loaded the ATMs, with cash inside, onto a trailer which was then towed away by a car while the rest of the gang escaped in another vehicle.

The gang then sped towards the Border - in a VW Amorak SUV and a Mercedes red saloon in the knowledge they could not be followed into the North by Garda personnel.

During their drive to the border they were pursued by unarmed gardaí in patrol cars and members of the Armed Support Unit. Two Garda vehicles were damaged in efforts to stop the gang’s cars.

NEWS: Three men have been arrested by @PSNINMDown in south Armagh following this morning's raid on @UlsterBank & @AIBIreland on Clanbrassil St. in Dundalk. Both ATMs that were stolen have been recovered but at this stage it's not known if they are intact. pic.twitter.com/wZY0eFzc1f

Although the gang managed to flee across the Border into South Armagh, gardaí had liaised with the PSNI who responded.

The PSNI discovered the trailer with two ATMs abandoned at Mullabawn close to Forkhill in Co Armagh.

They also established that three suspects had fled to a property in Crossmaglen, Co Armagh, which was raided by a team of PSNI members, including an armed response unit.

Three suspects were arrested at that property; all males and aged 57, 29 and 24 years of age. They are being questioned in the North about the robbery.

Gardaí said while gangs targeting ATMs had been especially active in cross-Border raids in recent years, they believe the gang involved in Saturday’s robbery was likely seeking to take advantage of the pressure the Covid-19 crisis had put in policing.

A large crime scene in Dundalk remained sealed off on Saturday while the PSNI was carrying out searches in south Armagh.

The fire brigade brought under control the two fires set at the vehicle access routes into Dundalk Garda station and those scenes had been cleared on Saturday.

Garda sources said a large degree of planning had gone into the robbery and while three suspects had been arrested, the group involved was much larger.

Gardaí believe the gang are mainly from south Armagh, with links to the Republican movement, and that they have specialised in ATM robberies just across the Border in the Republic in recent years as well as other crimes.

One of the men arrested is a suspect for a serious gang crime under investigation by the Garda, the details of which cannot be revealed for legal reasons.

Minister for Justice Charlie Flanagan praised the Garda and PSNI for the way both had responded to the raid.

“I am glad to see both police services working so closely together across the border to investigate this robbery and want to commend them for their swift response and close cooperation,” he said.

“Both services are working flat out in difficult circumstances to help protect and support the public at this challenging time and, as always, they deserve our support and cooperation.”

Mr Flanagan and Garda Headquarters, Phoenix Park, Dublin, urged anyone with information to contact the Garda.