Coronavirus: Efforts to tackle nursing home outbreaks to be ramped up

Fianna Fáil spokesperson for health Stephen Donnelly TD highlights how a lack of PPE has lead to positive coronavirus cases in nursing homes and the homecare industry. Video: Oireachtas TV 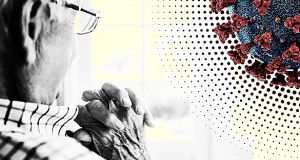 Outbreaks of Covid-19 have been reported in nursing and long-term residential care homes across the country. Image: Paul Scott

Further measures to tackle scores of coronavirus outbreaks in nursing homes, along with a multimillion euro package of economic supports for the sector, are due to be announced by the Government on Saturday.

The measures, which aim to “double down” on clusters of the disease now reported in 38 nursing homes, include twice-a-day temperature checks and the appointment of Covid-19 managers in affected homes.

The daily toll from the outbreak rose to its highest level on Friday, with the reporting of another 22 deaths – 11 men and 11 women – of patients diagnosed with coronavirus. There have now been 120 deaths from Covid-19 in the Republic, with a median age of 82 years.

The number of new confirmed cases also rose to a record daily high, at 424, the National Public Health Emergency Team also reported on Friday. There are now 4,273 confirmed cases of Covid-19 in Ireland.

Reporting the figures, chief medical officer Dr Tony Holohan expressed concern at the number of clusters in nursing homes. “We need to see continuous actions being taken to reduce the risk of transmission in nursing home and long-term residential facilities,” he warned.

Dr Holohan said a range of measures are being implemented to strengthen controls and infection prevention in nursing homes and to support training. Specific risks identified in some homes are being followed up.

The new measures are expected to be announced by Minister for Health Simon Harris on Saturday after the sector is briefed.

Amid continuing concern over delays in testing , sources said the Government is seeking a clear “road map” from public health officials early next week for ramping up the service.

HSE chief clinical officer Dr Colm Henry said most sampling centres, some of which were forced to close last weekend due to equipment shortages, were now “back up and running”.

At least one type of respiratory mask and one type of face goggles was considered not to be usable by the HSE after it inspected the first consignment. Sources said the HSE hoped to eliminate these problems in future shipments.

Meanwhile, the number of people tested has increased significantly on the 30,000 figure cited at the start of the week, according to Dr Holohan though he declined to give specific figures until next week.

The HSE said it has an agreement with a lab in Germany to process Irish tests and “this should help to improve turnaround times in testing over the coming weeks”.

Dr Holohan said the next seven to 10 days will be crucial in terms of understanding trends governing the growth in new cases. The National Public Health Emergency Team should be able to make “more certain estimates” of these trends towards the end of next week when the impact of the restrictive measures ordered by the Government become apparent.

“It really will be the better we do, the lower the peak will be [and] the further into the future it will be.”

1 ‘Frustrated and angry’: Thousands march in Dublin to protest death of George Floyd
2 Covid-19: Easing of restrictions ‘unlikely’ to be speeded-up
3 Couple injured in shooting incident at farm in Co Waterford
4 Coronavirus: One more death in Republic as expert warns house parties are ‘disaster’ for containment
5 US: Trump threatens to deploy military to end protests
Real news has value SUBSCRIBE