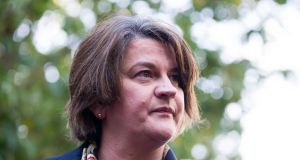 Arlene Foster apologised again ‘for my failings in the implementation of the RHI scheme’.

The Northern Assembly will on Monday debate the report into the botched Renewable Heat Incentive (RHI).

Up to three hours have been set aside for the debate as politicians consider the fallout from the 656-page report published on Friday.

In his report, Sir Patrick Coghlin’s was highly critical of how the scheme was operated and said it should never have been adopted in the first place. But he found there was no corruption or “malicious activity” involved by Stormont ministers, officials and special advisers.

The scheme was introduced by the North’s Department of Enterprise, Trade and Investment (DETI) in 2012 when the current DUP First Minister Arlene Foster was its minister.

Unlike the scheme in England and Wales, there was no cap on subsidies with the result that the 2,000 people approved to install wood-pellet boilers received £1.60 for every £1 they invested in the green heating scheme.

The overall overspend on RHI could be about £500 million, it is estimated. Cost-cutting measures were introduced that could considerably reduce that cost to the Northern Ireland taxpayer. But equally, with legal cases pending from those who signed what they considered legally binding contracts, that overall cost could spiral back up to around half a billion pounds.

Judging by the current reaction to the report, which is being overshadowed by coronavirus, it seems unlikely that Ms Foster’s position as DUP leader and First Minister is under threat.

Following the publication of the report, Ms Foster apologised again “for my failings in the implementation of the RHI scheme” and said it would require “careful consideration so that collectively we can ensure there is no repeat of the many systemic failings across government.”

While Sir Patrick was critical of Ms Foster for signing a key document which lacked necessary costing information, he also said that as DETI Minister she was “incorrectly” told by officials that the RHI scheme was projected to provide the highest renewable heat output at the best value.

This was one of a number of significant failings by the civil service identified in the report. Had some of these been addressed, Sir Patrick found, they might have prevented or mitigated some of the flaws in the scheme.

These included the failure, by DETI officials, “properly to understand the damaging presence” of the “perverse incentive” which meant the more participants in the scheme burned, the more they earned.

“Numerous mistakes and omissions” in policy advice provided by officials were often repeated in later submissions or other documents used to transmit or explain decisions, thus compounding the errors, while “basic administration and record keeping” was found to be lacking “on too many occasions.”

The department lacked the resources and capability to deliver the scheme, and without them “DETI should never have embarked on such a novel and complicated, demand-led scheme”.

Dave Penman, the general secretary of the FDA, the senior public servants’ union, said the first and recommendation of the report was that “any new policy, at its earliest stage, should be subject to a rigorous process to determine whether the devolved administration has or is prepared to assign the necessary skills and resources to deliver the policy safely and competently”.

He said that “civil servants, like all public officials, expect to be held accountable for their actions. As the report makes clear, much of that accountability is shared across civil servants, ministers, special advisers and, indeed, the Assembly.”

The union, he said, welcomed the proposal for an independent panel to assess the report and consider whether individual civil servants should be subject to disciplinary action.

“Our hope is that ministers and the political parties similarly consider how they will assess the accountability of individuals for their role in the scheme and make those considerations public,” he said.