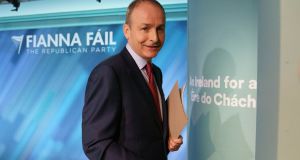 Fianna Fáil leader Micheál Martin: ‘In moments like this you just have to step up to the plate.’ Photograph: Fran Veale

Fianna Fáil leader Micheál Martin has said government formation talks must be expedited as he suggested a coalition could be formed with Fine Gael even if the Green Party does not participate.

Mr Martin said he could not pre-empt what the Green Party will do amid reports that they may pull out of talks. A spokesman for the Green Party said no such decision has yet been made and that their position remains that talks should be suspended.

Mr Martin said the process of forming a government needs to accelerated in order to deal with “the kind of big decisions that have to be taken” in light of the coronavirus health crisis.

“We need a full government with all ministers accountable to the Dáil in terms of the large amounts of money that are going to be spent but also in terms of co-ordinating and proactively executing a national action plan.

He suggested that a government could still be formed even if the Green Party pull out of talks.

“There are others, the Dáil has a very large number of people there as well, who would, I think agree and be committed to forming a government with Fine Gael and Fianna Fáil if that were the option.

“In my view that needs very solid underpinning and needs a government that knows it is not just there for three months, not just there for six months, it can take decisions in the full knowledge it is there for four to five years. I’m of view that actually what is needed is to get broad priorities agreed. Covid-19 is the most urgent.”

He said he could not pre-empt what the Green Party would do. “I’m very clear myself what I should do, we are in uncharted territory.”

Meanwhile, Labour leadership contender Alan Kelly suggested on Sunday that his party could play a role in government formation. The party previously said it was going into opposition after a disappointing general election.